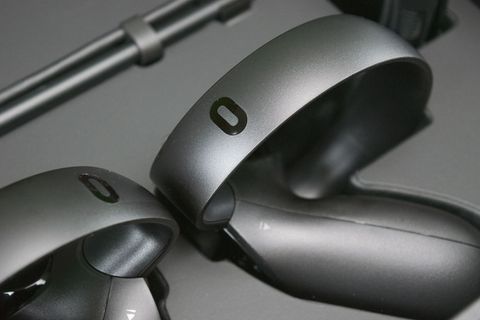 Before you can use the Touch controllers, you must configure them for your system. If you already own a Rift, the process is simple. Open Oculus' Home desktop app, click on the gear icon in the upper-right corner, and select Settings. Open the General tab and make sure that Automatic App Updates is turned on. If it wasn’t on, let the app update to the latest version.

If you haven’t updated Oculus Home in a while, the download could take some time. Remember, if you uninstall Oculus Home, you'll also remove your downloaded games. Oculus doesn’t have a backup function for store content.

Once Oculus Home is up to date, open the Devices tab in the Settings menu. In the upper-right corner of that pane, you’ll find a drop-down menu called Configure Rift. The current version of Oculus Home features an option called Add Touch, which walks you through the Touch pairing and calibration process. Run Full Setup also includes the Touch configuration routine.

What About The Newbies?

If you picked up a Rift along with Touch controllers, first, welcome to the world of VR. Second, before you plug anything in, download the installation package from www.oculus.com/setup. The Oculus Home installer walks you through the entire setup process, step by step.

Oculus changed a few things about its software installation since we first evaluated the Rift in March. Back then, you didn’t have control over the installation directory. Home installed to C:/Program Files (x86)/Oculus, no matter how big your hard drive was. If your boot drive was a 128GB SSD, you were stuck with that. Oculus now allows you to select the destination for its software.

The first time you open Oculus Home, you’re prompted to set up the Rift. This process starts by asking if you’re setting up a Rift headset or a Rift with Touch controllers.

The next step involves plugging the hardware into a PC. There's no way to continue until the software detects the HMD's HDMI and USB signals, and, if you're using Touch, a USB signal from at least two sensors.

Once the install finds a headset and sensors, you're asked to connect the Oculus remote and Xbox One controller. Follow the on-screen prompts.

If you haven’t installed batteries into the Touch controllers yet, do that now. To open the battery compartment, locate the eject icon stamped into the handle. Flip the controller upside down so the buttons and joystick face your palm. Press your thumb on the upper edge of the cover. You don’t need to push hard, but you must apply force at the correct angle.

You must go through the same process for the right controller. To start its pairing process, hold the Oculus and B buttons down until the white LED starts blinking. Repeat the same steps.