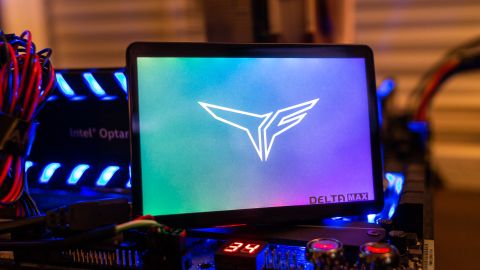 While limited by SATA, the Delta Max RGB still delivers responsive performance and unmatched looks. If you're after an eye-catching SSD, Team Group’s latest RGB SSD is hard to beat.

A flashy new PC build wouldn’t be complete without some flash storage to load your favorite software and apps. And with so many components hitting the market with RGB infused into them, wouldn’t it be nice to choose an RGB storage device to match with the rest of your shiny new components?

Today, we’re going to take a look at the flashiest SSD we have reviewed to date, the Team Group T-Force Delta RGB. If you're searching for some stylish storage, the Delta Max may be the perfect choice for you. Just note that it’s priced higher than most SSDs, both SATA and PCIe alike. The RGB tax is in full effect here.

It’s common to see components with RGB LEDs whenever you look for PC components these days. We've seen RGB SSDs before, including the original Delta from Team Group. But none have been as eye-catching as the Delta Max, which we first saw at Computex 2019. With a gorgeous dark mirror finish that looks great with the lighting off, this drive can become the centerpiece of almost any build. But what really makes it stand out from the rest is the lighting hidden under its shell.

Spanning almost the entire surface of the SSD is an RGB LED module. When used with the USB header adapter cable, it defaults to a mixed color, water-flow-like lighting effect. It also supports motherboards (compatible with ASUS Aura Sync, GIGABYTE RGB Fusion, MSI Mystic Light Sync, ASROCK-Polychrome Sync software) or lighting controllers with a 5V 3pin ARGB Addressable LED header to Micro B USB cable. That means you can sync it up with any of your other components with ease.

The Delta Max comes in a 2.5-inch, 9.5 mm form factor, about 2.5mm thicker than most similar SSDs due to the RGB module. Even if you don’t care to see the flashy lights, you can simply appreciate the beautiful mirror finish of the drive.

With Silicon Motion’s SM2258 SATA controller and Samsung’s 64L 3D V-NAND, the components within complement the looks. This isquite a rare combination to come across too, as Samsung NAND is usually found within only Samsung drives.

Next Page Performance Results
No comments yet Comment from the forums