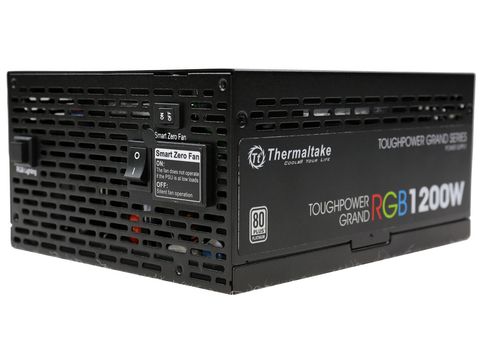 A truly high performance PSU with the right price tag. What more to ask from Thermaltake? Probably a little better polymer cap selection, a bit higher efficiency under light loads and a proper power ok signal; and just for the case, a lower OCP level at 5VSB. At this price point it is very hard to find something equally good, featuring also RGB lighting.

It's easy to see that Thermaltake really likes RGB lighting based on its power supply portfolio. Today, we're looking at the company's Toughpower Grand RGB 1200W Platinum (also known as the TPG-1200F1FAP). This PSU features a 140mm Riing fan sporting 256 colors. The fan's LED lighting supports five different modes: RGB cycle, solid red, solid green, solid blue, and solid white. You can also switch the lighting off (a blessing for anyone who doesn't want a flashy power supply). And thanks to built-in memory, the lighting doesn't have to be reconfigured every time your PC boots up.

We already evaluated its high-end sibling, the Toughpower iRGB Plus 1200W Platinum (or TPI-1200F2FDP), which appears to be based on a slightly modified version of the TPG-1200F1FAP's foundation. So, given a good impression from the iRGB Plus model, we expect the Grand Platinum to serve up high performance as well.

In general, CWT has lots of experience developing and manufacturing digital platforms, mostly thanks to its collaboration with Corsair. The time has come to pass this knowledge to other brands, and there is no doubt that Thermaltake did well to exploit CWT's expertise. After all, digital circuits are able to offer increased efficiency and top-notch performance when they're used properly. Analog platforms still have lots of life left in them, and can be tough to beat (just look at Seasonic's Prime Titanium). However, we strongly believe that the use of digital circuits in PSUs will eventually prevail, setting new performance benchmarks that analog platforms won't be able to match.

As its model description suggests, the TPG-1200F1FAP is 80 PLUS Platinum-certified. In the Cybenetics program, it achieves ETA-A and LAMBDA-S++ ratings. The rest of its features include fully modular cabling, a 50°C temperature rating, and a complete suite of protection features that includes over-temperature protection.

According to Thermaltake, its cooling fan uses a hydraulic dynamic bearing. A semi-passive mode supports the fan at load levels under 40%, and there's a switch in the back to turn this off.

Finally, the PSU's dimensions are compact given its capacity, while the warranty is a lengthy 10 years.

The +12V rail can deliver this PSU's full power on its own, while the minor rails offer an impressive 130W maximum combined power. Meanwhile, the 5VSB rail has 3A of maximum current output, which is plenty for any modern system.

All of Thermaltake's cables are long enough, and the distance between connectors is adequate at 15cm. The main ATX, EPS, and PCIe cables have thicker wires (16AWG), while the rest have normal 18-gauge wires. The only exception is the FDD adapter, which doesn't need thick wires.

There are no in-line capacitors  on the cables. This should make many builders happy, since those caps make cables bulky and difficult to route through a chassis.