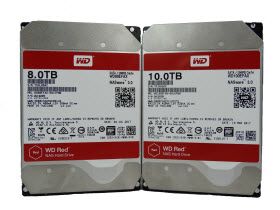 We use a Thecus N8880U-10G rackmount for our NAS testing. It features an Intel Core i3-2120 dual-core processor running at 3.3GHz. This system allows us to test with up to eight drives in RAID 0, 1, 5, 6, 10, 50, 60, or JBOD. The Thecus system ships with a 10GbE network adapter from the factory and delivers consistent performance. We're testing the arrays over our 10GbE network.

We only have two 8TB Red and two 8TB Toshiba N300 HDDs, so we didn’t include them in our NAS tests. We used four 10TB Reds in RAID 5. We're also testing four 8TB Seagate Enterprise NAS models. Seagate recently replaced the Enterprise NAS series with the Guardian Series that includes the IronWolf Pro. All our arrays consist of four drives in a RAID 5 array.

A NAS running over the network presents new problems. You get many more variables, less consistency, and a new bottleneck that is often not related to the drives. The two sequential read tests show nearly identical performance when the drives are the primary variable.

Our system runs on a dedicated network devoid of outside traffic. Even with an isolated network, we see some variation in these tests with varying sizes of sequential writes. The drives didn't suffer from reduced performance, so we suspect the variability comes from the NAS.

All of these products were designed for NAS environments. The Red 10TB's dominance in single-drive mixed sequential workloads carries over into the NAS testing. Many of the single drive results will carry over, albeit with the RAID 5 write hole. Processing power and network do not hold us back in this test.

Our random performance tests scale with queue depth with both 4KB and 8KB blocks. 4KB is a common block size for Windows and Hyper-V virtualization. 8KB is a commonly seen workload with VMWare. Modern NAS appliances have evolved from pure storage devices to become intelligent, less focused, and very powerful.

Modern NAS come with new functions and desktop-like features, so random performance is more important than in the past when they were storage-only appliances. Several companies have released VMWare plug-ins and even allow virtual desktops on the appliances. That allows you to run multiple operating systems.

The 10TB Western Digital Red delivers exceptional mixed sequential performance, but it trails many of the other drives during mixed random workloads. If you plan to run applications on your NAS, the Red Pro product line will deliver better performance due to the higher spindle speeds.

The base Red series delivers better-than-expected performance for home users, but WD optimized it for the storage role.

Running applications over iSCSI never caught on like the industry hoped. It's more of a hidden feature inside Windows, but it's not overly complicated to configure or use. iSCSI for desktop use could have been the next big thing in storage if products like Intel's NUC had caught on. The systems are smaller than a desktop 3.5" hard disk drives, so it's impossible to have a large and economical storage volume. Unfortunately, desktop-style USB 3.x products are cheaper and less complicated than iSCSI. That also held iSCSI back, even though iSCSI is a superior technology for adding a very large storage volume to your PC.

iSCSI really takes off when more than one PC needs to access a redundant storage volume. For instance, if you have three kids in the house, each with a gaming PC that each require access to a very large storage volume, you can simply add an iSCSI volume to each PC. That allows you to keep the data secure with a redundant volume. Many new AAA games have an install base of close to 100GB, so beefy storage volumes are helpful.

In this test, we create an iSCSI volume and run the PCMark 8 Storage Test against it. Four Red 10TB drives running in RAID 5 provide a 30TB storage volume with data redundancy. There is only a small performance penalty compared to a single drive in the PC.