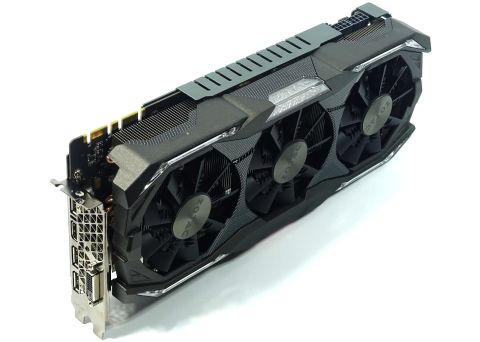 The general problem with all GeForce GTX 1070 Ti cards affects this model as well. Nvidia's mandated clock rates mean it doesn't matter if you buy a reference card or a fancy third-party board. The overclocking limits and factory performance are all about the same, plus or minus a few percent. Unfortunately, this card is especially problematic due to its issues with fan control and resulting noise. Even if Zotac were to fix that with a firmware update, though, there's no way we'd suggest spending $500 on a 1070 Ti when GeForce GTX 1080 cards start in the same range.

It seems like Zotac's R&D department had the right idea when they tackled Nvidia's GeForce GTX 1070 Ti. Little did they know just how much could go wrong when the money men try to play the role of engineers.

Since the performance of all third-party GeForce GTX 1070 Ti cards is similar, given fixed base and GPU Boost clock rates mandated by Nvidia, actual benchmark results depend on the GPU Boost frequencies each vendor can sustain. As you might imagine, then, cooling and chip quality play the most important roles. That's why we're putting our emphasis on the actual implementation of each model. To that end, a lot of equipment goes into thoroughly documenting a graphics card's behaviors.

At this point, it's not possible to reach a meaningful conclusion by comparing the performance of one card over another. The differences are too small. Therefore, we're not going to label manufacturers in our benchmarks, particularly since one of those two variables (chip quality) cannot be held constant, even between retail samples off the shelf. Just know that every GeForce GTX 1070 Ti fares similarly out of the box.

Not only does Zotac's bundle include a software DVD, user manual, and eight-pin power adapter, but also a brace to help compensate for the card's substantial weight.

Zotac's fan shroud is made of a light alloy, with carbon on rough anthracite highlights. The 1350g card measures an impressive 32.5cm long from the I/O bracket to its end, 12.5cm tall from the motherboard slot's upper edge to the top, and 5.3cm wide, including the backplate.

That length measurement is primarily a product of Zotac's three-fan cooler. Each nine-blade fan has a diameter of 8.7cm. Plus, the shroud itself is fairly large. As a result, it may be challenging to position this extra-long card in your case.

Around back, the PCB is covered by a one-piece, almost U-shaped plate. While the backplate doesn't help with cooling, it also has no negative impact thanks to ventilation openings cut into the surface.

Plan for an additional 5mm of clearance for the backplate. This extra requirement means the Zotac GeForce GTX 1070 Ti AMP Extreme isn't particularly well-suited for multi-GPU configurations. The card's stability suffers without the backplate installed, and the large width measurement means two won't sit back to back comfortably. You'd need a vacant slot in between them.

Up top, a centered Zotac label set into an acrylic plate is perhaps the most eye-catching highlight. Spectra lighting effects allow you to customize the color of this logo and border elements on the card's fan shroud using Zotac's FireStorm software.

Two eight-pin auxiliary power connectors are rotated by 180° to avoid interfering with the heat sink's fins. They're positioned at the card's end, facing up, so you don't have to worry about even more clearance behind the GeForce GTX 1070 Ti AMP Extreme in your chassis. The design feels rather slim and compact, despite its bulky dimensions.

From the back, this card is completely closed off. That makes sense, as the cooling fins are oriented vertically, blocking air from moving side to side and instead guiding it up (out the top) and down (towards your motherboard).

The I/O bracket features five familiar outputs, four of which can be used simultaneously in multi-monitor configurations. In addition to the single DVI connector, you get one HDMI 2.0 port (particularly useful for VR HMDs) and three DisplayPort 1.4-ready interfaces. Ventilation holes cut into the plate suggest help with exhaust, but they really serve no purpose since the fins direct air vertically.

Since the technical specifications are required to be the same for all GeForce GTX 1070 Ti, the following table applies to all cards collectively:

We introduced our new test system and methodology in How We Test Graphics Cards. If you'd like more detail about our general approach, check that piece out. In this case, only the CPU, RAM, motherboard, and cooling system are different.