Tom's Hardware is supported by its audience. When you purchase through links on our site, we may earn an affiliate commission. Here’s why you can trust us.

However, with last week’s release of the Oculus Link beta, the difference between the two devices is less obvious. You can now run PC VR games with an Oculus Quest, one of the best VR headsets (opens in new tab), provided you have a compatible USB cable, which begs the question: Is there any point in buying a Rift S anymore?

What is Oculus Link?

Oculus Link is a piece of software that Oculus integrated into its platform , which enables you to use a Quest as a PC-based VR system. The Oculus Link feature requires an extended USB 3.0 Type-C cable to tether the Quest headset to your PC.  (The charging cable that comes bundled with the Quest is not compatible as it is a USB 3.0 cable. Quest Link requires the bandwidth of the USB 3.0 specification.

The company is currently developing an optical USB cable that can carry an uncompromised signal over 5m, which should be available later this year. For now, you’ll need to find a third-party cable.

Pick Up A High-Quality USB Cable

For the beta release of the Link software, Oculus suggests using a 10-foot long Anker USB 3.0 to USB-C cable. As of writing this article, the 10-foot version that the company provided us appears to be sold out on Amazon, but we did find this six-foot version (opens in new tab).

You may not need to pick up a 10-foot cable, though. I tested my cable with a 15-foot Monoprice active USB extension cable that I have left over from when I had a Rift CV1 setup in my basement. The extension gave me a total of 25-feet of slack from my computer and it worked flawlessly.

The official Oculus Link cable will feature a right-angle USB Type-C connector for the headset, which should help reduce the risk of damaging the charge port on the headset. The Anker cable has a standard straight end. To mitigate the chance of putting pressure on the port, I secured the cable to the Quest’s head strap using a Velcro tie. This way, if I snag the cable, the port should be safe.

The Oculus Link beta is free to try, and anyone can test it out. However, the system requirements are somewhat steeper than running a Rift or Rift S headset. While you can run a Rift headset on a dual-core processor and a GTX 960, you would need at least a quad-core processor paired with a GTX 1070, a modern GTX 16-series, or RTX 20-series card to run PC games on your Quest. Sorry AMD fans, Radeon cards are not yet supported either.

Oculus said that it is currently working with AMD to ensure that Radeon cards would be supported by the end of the beta period.

Unsurprisingly, Space Pirate Trainer performed phenomenally on our test system with both headsets. On both devices, we observed a median GPU frametime of 3.8 ms, and the 99.9thth percentile topped out at 6.5 ms. The Quest performed slightly worse, with the 99th percentile frametimes hitting 5.8 ms compared to the Rift S’ 5 ms. In either case, you get butter smooth performance.

Serious Sam VR is a much more demanding game that Space Pirate Trainer and it pushed out GPU to the edge of its limits. With both headsets, the GPU failed to keep up with the workload. The Rift S demands 80Hz, which demands a frame latency of no more 12.5 ms. For the Quest’s 72Hz displays, the GPU has 13.9 ms to render each frame.

While the Quest’s worst frametime was slower than the Rift S, the GPU kept the frames coming fast enough to keep the Quest’s displays fed 99.8% of the time. The Rift S suffered missed frames 1.7% of the time. 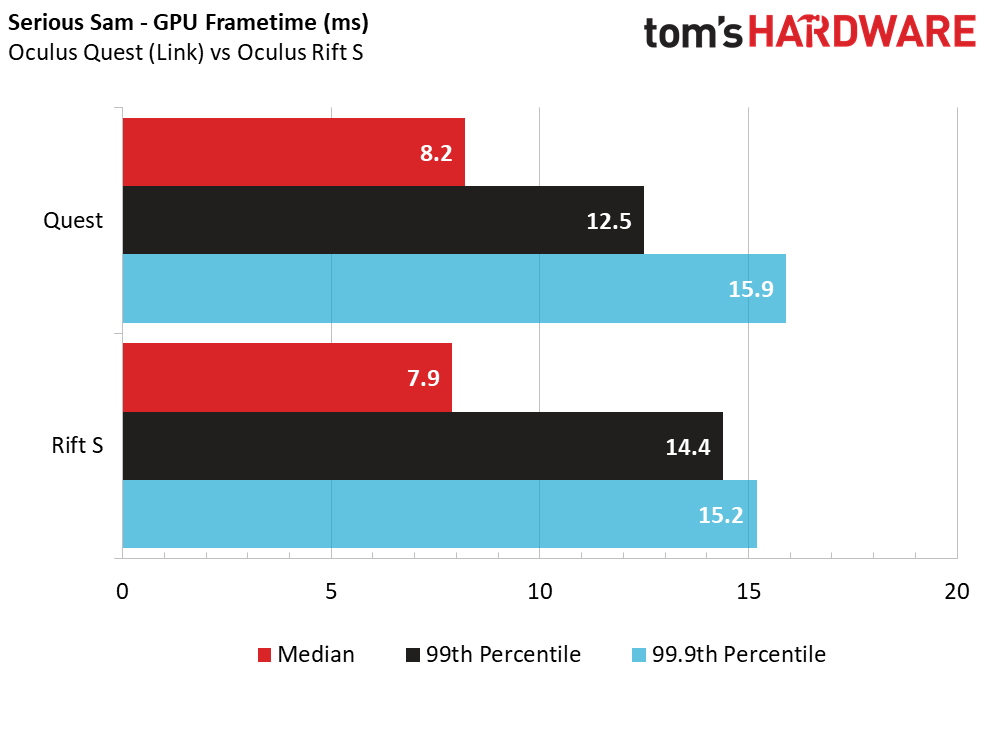 Serious Sam also gave our CPU a run for its money, but the 8700K managed to keep the frames pumping at just below the latency threshold of each HMD. The processor had a harder time pushing frames to the Rift S than it did for the Quest.

Like Space Pirate Trainer, Beat Saber is not a tremendously demanding game and our GPU had no trouble delivering a constant stream of frames to the displays. It’s interesting to note that Beat Saber on the Quest gave our GPU a slightly tougher workload than the Rift S.

The difference was within .4 ms even at the highest percentile, but that difference is constant.

The CPU results for Beat Saber were a big surprise because the numbers on the page didn’t seem to correlate with the experience in the headset. For both headsets, the median and 99th percentile results came in at 4 ms or less, but the 99.9th percentile spiked beyond 13 ms for the Rift S and as high as 14.5 ms for the Quest.

Arizona Sunshine is comparatively demanding to Serious Sam VR, though perhaps somewhat more optimized. At the worst percentile, our GPU took a full 17 ms to send the next frame to the Quest, and just over 14 ms on the Rift S. But the difference between the median and the 99th percentile figures is within 2 ms for both headsets, and those figures come in much lower than the maximum latency of the display input.

The CPU frametime results were even more surprising than the GPU test. The median frametime for the Quest was 3.8 ms, on the Rift S it was 4.6 ms. The 99th percentile of each was 5.6 ms and 6.4 ms, respectively. However, the 99.9th percentile results were off the charts—literally. The FPSVR software records to a maximum of 30 ms so we don’t actually know the real maximum for either headset. Either way, the Rift suffered worse latency than the Quest in this game.

Next, power on your Quest headset and check the firmware version in the settings panel. Your Quest must be running version number 11.00 or higher.

Once you have both the desktop and Quest up to date, plug in the USB cable on both the headset and computer ends. Provided the USB cable and the port on your PC are compatible, the Oculus software should automatically detect the Quest and prompt you to run the setup wizard. I was unable to get the Quest working through my front USB ports, but it detected fine when plugged into the back of the motherboard.

The setup tool will test the signal strength of the USB cable before it will allow you to proceed. If the headset is detected, it will install the remote rendering driver for the Quest. Inside the headset, you’ll see a prompt asking you to enable Oculus Link. If you see a prompt to “Allow access to data,” select deny and then you’ll see the Oculus Link prompt. When you press allow, the Quest will switch from the mobile Home environment to the PC Home environment. From here you can access all your Rift compatible content.

If the PC Home environment doesn’t open automatically, you can switch to Oculus Link mode manually through the settings panel.

Oculus Link works surprisingly well, but it’s not a perfect solution and I’m not sure I would recommend trading in your Rift S just yet. While I didn’t experience any artifacts, it did feel like the games were running at a lower resolution than the native resolution of the displays in the headset.

The Oculus Quest also has a lower refresh rate than any other PC-connected VR headset on the market today. The standard rate is 90Hz, which is what you find in the original Rift, every generation of Vive and most Windows MR headsets. The Oculus Rift S features and 80Hz panel, and the Quest--being a mobile device in nature—features screens clocked at  72Hz.

Not long ago, I would have argued that high-fidelity VR content would make you sick running any slower than 90Hz. However, I have never felt a tinge of motion sickness with my Quest, and that didn’t change when I plugged it into my PC.

The buttery smooth visual experience that you get from Valve’s Index at 120Hz is, of course, better than the Quest’s 72Hz gameplay. But I don’t think the average person would notice a difference, especially if they only play casually.

It didn’t come as surprise to me that Oculus would enable customers to play Rift content from the Oculus Store on their Quest headsets. What I wasn’t expecting was to see Oculus support Quest on Steam VR, but it works just fine. The Oculus software running alongside Steam VR has always added a bit of overhead and Oculus Link doesn’t make it any worse.

For the Oculus Quest, we set Steam VR to determine the appropriate render resolution for our test system. SteamVR settled on 150%, which resulted in 2212 x 2448 pixels per eye. At a refresh rate of 72Hz, that equates to 389,878,272 pixels per second.

Oculus Link is Impressive, But it’s not as Rift Replacement

Oculus already won me over with the Quest earlier this year, but the introduction of Oculus Link takes my appreciation for this device to a new level. With this one $399 device, you can play all the best mobile VR content, including a wide selection of the best Gear VR titles, the entire catalogue of Quest-specific titles, and the vast library of PC-VR content that’s available on the Oculus Store and Steam combined.

But with versatility comes compromise.

The Oculus Quest may support the widest range of content, but that may be its only advantage when you compare it head to head with other PC-connected headsets. The Quest is not the most comfortable device, it doesn’t offer best-in-class visuals, the USB tether removes its tether-less advantage and it introduces a fragile wear-point (the USB port) that we don’t see on other PC VR headsets.

I’m not going to argue that Oculus Link is bad. Frankly, it’s amazing. However, it’s Oculus Link is not a be-all-end-all solution. It’s a great option for anyone who would love to experience the breadth of the VR content universe and can’t afford two headsets. It also serves as asolution for anyone who doesn’t have the means for both a headset and a gaming PC at once but would like to upgrade to PC VR in the future.

I would not recommend that you pick up a Quest if you intend to use it primarily on your PC, though. I still believe that a dedicated PC VR solution is the better option if you have the means, though I think most people would be satisfied with the experience that a Quest with Oculus Link offers.

Kevin Carbotte is a contributing writer for Tom's Hardware who primarily covers VR and AR hardware. He has been writing for us for more than four years.