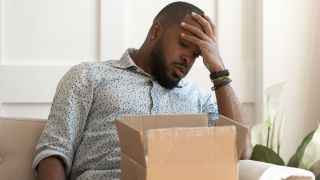 You don't always get what you pay for. Customers who ordered an Adata XPG SX8200 Pro (1TB) SSD from Rakuten during the Black Friday weekend have been receiving the slightly-slower, SX8100 drive instead

The Adata XPG SX8200 Pro is one of the fastest M.2 NVMe SSDs on the market and the best value or the money when compared to pricier competitors like Samsung's 970 EVO Plus. It normally goes for around $147 so when Rakuten had it for $106, many enthusiasts pulled the trigger.

In a thread on the /r/buildapcsales/ subreddit, a number of users reported receiving the inferior drive, shortly after getting an email from Adata  (via Rakuten) stating that the company's shipment of SX8200 Pro drives was delayed and that it was substituting an SX8100.

"We apologize for the inconvenience, but due to an issue at the port, the 8200 item you ordered was delayed and will be delayed until the week of 12/22. We had sent out messages regarding this previously, however some people did not receive this message, that is why we are sending another one. Due to the long wait, we offered customers to swap to the 8100 to avoid the long delay as an option and if there was no response, the 8100 would be shipped. If you received the 8100 and wish to return it, please let us know as we offer free returns and will provide you with a free return label to ship 8100 back to us for a refund or for the 8200 once it is back in stock on the week of 12/22."

Though users ordered their drives through Rakuten, the orders were fulfilled directly by Adata, the SSD's manufacturer. The text of the email states that Adata had tried contacting the customer in a prior message to ask if they would like a refund and since the company received no reply, it shipped out the SX8100 instead.

Adding to the confusion just a little bit: a label on the outside of the shipping box read "ASX8200PNP," while the package inside was correctly marked as the SX8100.

We spoke with Adata Marketing Manager Chris Kuo who admitted that the company hadn't managed its inventory well, resulting in the shortage, and described the controversy as a learning experience that would change how it handles similar issues in the future. She insisted that all consumers were sent an initial email offering them the opportunity to either wait for the SX8200 Pro to come in stock, get a refund or receive the SX8100 instead. If the company received a response, she noted, the consumer's wishes were followed.

The packaging carried SX8200 Pro labels on the outside, she noted, because the boxes were stickered before they were packed and before the decision was made to put the substitute products in.

"This is a lesson learned for us," Kuo said. "Next time we will ship out replacements to those customers who reply and directly cancel the orders for those who do not reply."

Consumers who bought the XPG SX8200 Pro through Amazon were not affected, because Amazon fulfilled those orders and, according to Kuo, had adequate stock.

We also reached out to Rakuten for comment. The online marketplace said that it was aware of the problem with Adata's inventory and that it fully expected the company to replace the SX8100 units with SX8200 Pro models.

"If a customer who received an 8100 in error hasn’t heard from ADATA already, they should receive an email from them shortly about their plans to replace or refund it," Rakuten said in a statement. "ADATA has assured us that that they plan to replace customers expecting 8200s with the correct units when they are back in stock and that they can continue to use the 8100s while they wait."

Besides just wanting exactly the model they paid for, there's a good reason that customers would prefer an XPG SX8200 Pro over the SX8100. The top pick on our best SSDs page, the Adata XPG SX8200 Pro uses an SMI SM2262EN controller that has a 1GB DRAM cache as opposed to the Realtek RTS5762 which has a "partial DRAM" cache of an unspecified amount.

Except that the latter has a heat spreader, the XPG SX8100 is nearly-identical to the XPG Spectrix s40G, which we are in the process of reviewing. On most tests, the XPG SX8200 Pro scored better.

What You Can Do

If you're a customer who ordered an SX8200 Pro from Rakuten but received an SX8100, you should have received an email from Adata telling you how to send it back for either a refund or an SX8200 Pro. However, if you haven't heard from Adata, you can contact Rakuten by emailing support@customersupport.rakuten.com or calling (800) 800-0800.

Kuo said that Adata is working with Rakuten to get customer's phone numbers so that, if a similar situation arises in the future, the company will be able to call people who don't answer via email.

Unfortunately for Adata, even sending the correct SSD may not restore trust.

"The communication was bad and the entire idea of sending a customer lower quality product because the one they ordered is out of stock is ridiculous," said Adam Miller, a consumer who ordered the XPG SX8200 Pro from Rakuten on November 28th. "I won't be shopping their products again and I hope I can get this issue resolved in a timely manner. The worst part is that there will undoubtedly be customers who don't catch the switch and will be stuck with a product they didn't even want."