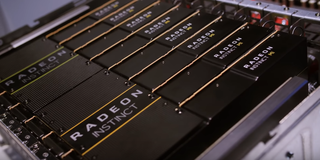 In April, AMD announced its $15 million COVID-19 HPC fund, which is intended to bring supercomputing power to researchers combating the pandemic. Today, AMD announced that three universities are receiving the promised support.

“High performance computing technology plays a critical role in modern viral research, deepening our understanding of how specific viruses work and ultimately accelerating the development of potential therapeutics and vaccines,” said Lisa Su, President and CEO of AMD, said in a video message via YouTube.

“AMD and our technology partners are proud to provide researchers around the world with these new systems that will increase the computing capability available to fight COVID-19 and support future medical research.”

Rather than working with a grant, AMD's high-performance computing fund donates computer systems to the researchers. The systems consist of one AMD 2nd-generation Epyc processor, along with eight AMD Radeon Instinct MI50 graphics cards per node, though it is unclear how many systems each university will receive, or which exact model Epyc CPU is used, but they are worth a total of about $1 million.

"The AMD gift will be truly transformational for Rice's computational attack on COVID-19," Peter Rossky, dean of Rice's Wiess School of Natural Sciences, said. "We have the methods to progress, but studies of large, complex systems are at the cutting-edge of computational feasibility. The AMD contribution of dedicated, state-of-the-art computational power will be a game changer in accelerating progress toward defeating this virus."

The systems will hopefully be able to help researchers better understand transmissions, genomics, synthesizing a vaccine or any other related workload that requires large amounts of compute power to solve.

AMD also announced that it is donating compute power through similar systems based in the cloud, located at Pengiun Computing, to researchers fighting the cause.