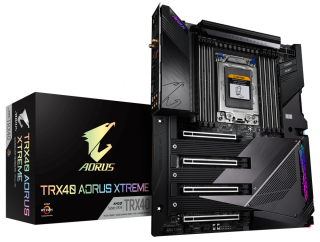 AMD today announced its Ryzen Threadripper 3000 HEDT processors, set to arrive on November 25. Gigabyte, (as well as AsRock). is already taking part in the fun, revealing a trio TRX40 chipset-based motherboards: the TRX40 Aorus Master, TRX40 Aorus Xtreme and TRX40 Aorus Pro WiFi. Lastly, the TRX40 Designare has also been listed on the Taiwanese manufacturer’s website but, alas, without any images.

The TRX40 Aorus Xtreme is Gigabyte’s flagship TRX40 board – and coincidentally (probably not) also the board that Gigabyte has been teasing for a while.

At the heart of this motherboard resides an sTRX4 CPU socket, which is fed by an impressive 16+3 phase power circuitry. The board comes with very lavish connectivity options, with four PCIe 4.0 x16 slots (although, two of them will only have access to eight lanes) and four M.2 slots each with access to four PCIe 4.0 lanes. This quadruplet of M.2 slots can be used to run up to four NVMe SSDs in a RAID 1, 0, or 10 array. It looks like Gigabyte has pulled this off simply by including its Gen4 M.2 AIC adapter.

Because the new TRX40 chipset has access to twice the number of PCIe lanes as its predecessor that each run at twice the data rate, it’s capable of handling more intensive tasks. Consequently, Gigabyte has equipped the motherboard with lots of cooling goodies. This means that the VRM circuitry has very hefty black-anodized heatsinks, the M.2 slots have their own metal shields, the entirety of the motherboard has a massive thermal shield, and there's even a 50mm fan to cool the chipset.

If your requirements aren’t quite as high but still significant, the TRX40 Aorus Master and TRX40 Aorus Pro WiFi might be more fitting. While they’re based on the same sTRX4 socket, chipset as any TRX40 board is, the don't come with as many fancy goodies as the Aorus Xtreme board.

Both boards still have quad-channel memory support and heaps of PCIe slots. The TRX40 Aorus Master has a similar VRM circuitry as the Aorus Xtreme variant, with a 16+3 phase design. Meanwhile, the TRX40 Aorus Pro WiFI makes do with a perfectly adequate 12+2 phase circuit. Both of these motherboards also come with a trio of onboard M.2 slots, each having access to all four PCIe 4.0 lanes and their own thermal guards.

If you want to get in on the Ryzen Threadripper 3000 series, the TRX40 Pro WiFi should be adequate if not. But if you want to overclock, yet aren't ready to spend big bucks on a flagship board, then the TRX40 Master is probably a better fit for you with its improved VRM circuitry. However, If you’ve got money to burn, the TRX40 Aorus Xtreme is one of the most beastly TRX40 boards we've seen yet.

Thus far, Gigabyte has not revealed pricing information about the its four upcoming motherboards, but if rumors are to be believed, they won’t be in the realm of ‘affordable.'