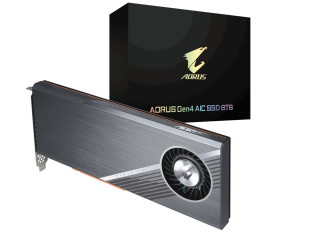 Even though it’s not really a secret anymore, Gigabyte now formally announced this week the Aorus Gen4 AIC SSD 8TB. This is a PCIe add-in-card which houses four 2TB PCIe 4.0 x4 NVMe SSDs, which turns it into, for lack of better words, an absolute storage monster.

Add those numbers up, and you’ve got an 8TB NVMe SSD that runs over the new PCIe 4.0 standard with access to 16 lanes. Gigabyte claims that it should manage a throughput (read and write) of about 15,000 MBps. The unit is rated at 430,000 random read IOPS and 440,000 random write IOPS.

Let’s just put this into perspective. The typical 2.5-inch SATA SSD has a throughput of around 550 MBps, and if you’ve got a fancy PCIe 3.0 x4 NVMe M.2 SSD, you might have a read speed of about 3,500 MBps. This makes Gigabyte’s new AIC almost 30 times as fast as the SATA SSDs many users have.

Gigabyte’s new AIC SSD does need some cooling, though. It comes with a blower-style cooler that pulls air in and exhausts it out the back of the card, outside the PC case. On its way, it cools a copper heatsink placed over the quadruplet of M.2 SSDs installed inside the unit. Inside Gigabyte also fitted the unit with eight temperature sensors, which can be monitored from within the Aorus Storage Manager software. Interestingly, this SSD is one of the few Aorus-branded products that doesn’t come with RGB lighting (though we doubt that's a primary concern of anyone looking at this offering).

The M.2 SSDs inside the unit are built with Toshiba BiSC4 96-layer 3D TLC NAND, which enable a transfer rate of up to 800 MTps. The NAND on each SSD is brought together by a Phison PS5016-E16 controller. Durability is rated at 3,600 TBW per 2TB SSD. Because we expect this to be a rather costly purchase that any user would want to last, it's fortunate Gigabyte offers a 5-year warranty with it.

This all sounds good, but is there is a caveat. As noted, the Aorus Gen4 AIC SSD 8TB runs on PCIe 4.0. So the only platform you can currently use this with is an an AMD X570 motherboard paired with an AMD Ryzen 3000 CPU. The Ryzen 3000 CPUs have 24 PCIe lanes – four of which are downstream to the chipset. Consequently, from the 20 lanes left, you’d eat up 16 with the Aorus SSD. That leaves only 4 lanes, which may be enough for a graphics card (given that PCIe 4.0 is effectively twice as fast as PCIe 3.0), but the PCIe 4.0 interface is so new it's hard to know for sure without testing.

Thankfully, the rumor mill has been working hard and the TRX40 platform for AMD's Ryzen 3000 Threadrippper CPUs is set to launch next month. Given that the CPUs will carry similar specs as AMD’s Epyc line of CPUs, which have 128 PCIe 4.0 lanes, we’re confident that the Ryzen 3000 Threadripper will have a sufficient number of lanes for utilizing Gigabyte's new Aorus Gen4 AIC SSD 8TB.

No pricing has been revealed yet.

9 Comments Comment from the forums
Be In the Know