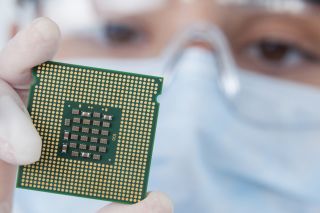 By now, it's no secret that the next-generation Comet Lake CPUs for desktops are coming, as plenty of leaks have made their way onto the internet. Today is another day with yet another leak surfacing, and this time it's about the i7-10700F, courtesy of Korean Quasarzone.

The Intel Core i7-10700F is expected to be an 8-core 16-thread chip, with the leak showing a nominal clock speed of 2.9 GHz. Of course, that says nothing about the boost clocks, but the performance figures shown demonstrate the chip scoring 4781 points in Cinebench R20, with a single-core score of 492 points.

For comparison, we've benchmarked the Intel Core i9-9900K (see our i9-10980XE review for the details), and it scored a total of 4997 points in Cinebench R20. That tells us that the performance of the two chips will be quite similar.

Although it's still not entirely clear when the new Intel CPUs will come out, they are predicted to land sometime in April. The reason for taking so long is said to be that Intel is having trouble sorting out the power consumption problems, which comes as no surprise as the i9-9900K was happy to burn through 200W without all too much effort. Intel also isn't expected to be making the jump to 10 or 7nm yet, further complicating the problems.

26 Comments Comment from the forums
Be In the Know