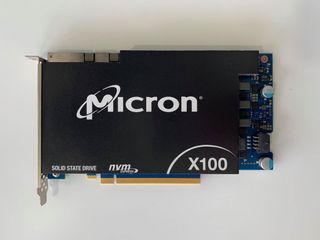 Micron announced its X100 SSD today, which its bills as the world's fastest SSD with 9GB/s of sequential performance in both read, write, and mixed workloads, and up to 2.5 million random IOPS.

Intel and Micron co-developed the revolutionary 3D XPoint storage media, which blends "DRAM-like" performance with a much lower price point and persistence (data remains on the storage device after power is removed). After the initial announcement in 2015, Intel went on to develop a wide range of 3D XPoint-powered devices, branded Optane, that encompass both storage and memory devices.

Micron initially announced QuantX, a series of high-performance SSDs that promised to upend the enterprise storage market, in 2016, but those drives never made it to market. In the interim, Micron and Intel have parted ways on joint 3D XPoint development, leaving Micron with no vehicle to sell it own 3D XPoint-infused devices on the open market.

That changes today with the debut of Micron's X100 SSD. Here are the product highlights:

The back of the card reveals 16 emplacements for 3D XPoint packages, but it isn't clear if the SSD uses the first generation of the memory, or the soon-to-arrive second generation.

We also see the X100 has an auxiliary 8-pin power connector, which means this drive will consume quite a bit of power. The cooling solution is passive and designed to take advantage of the linear airflow in servers. Micron isn't sharing specifics of its controller, though we are told it is a proprietary design.

Unfortunately, Micron's X100 series is aimed at the data center for now, meaning we won't see an equivalent for the desktop market in the near term. However, with Micron now finally making headway on its own 3D XPoint-infused SSDs, we hope that will change in the future. Micron says it is sampling the drives to early customers now, but hasn't shared information about the various capacity points or pricing.

19 Comments Comment from the forums
Be In the Know