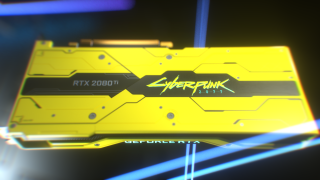 That didn't take long. Nvidia today confirmed that it made a limited GeForce RTX 2080 Ti Cyberpunk 2077 Edition graphics card in partnership with CD Projekt Red to celebrate the upcoming release of the titular open-world RPG later this year.

CD Projekt Red and Nvidia teased a Cyberpunk 2077 graphics card on Twitter over the weekend. Fans speculated about the possibility of a themed RTX 2070 or RTX 2070 Super, for obvious reasons, but Nvidia decided to go with an RTX 2080 Ti instead.

Nvidia said in today's announcement that "fewer than 200 units" of the GeForce RTX 2080 Ti Cyberpunk 2077 Edition were produced. It's giving away 77 of them (fittingly enough) as part of another #RTXOn Sweepstakes being held on multiple platforms.

The company said people can participate in the giveaway by doing the following:

The sweepstakes runs until February 28. (Nvidia shared the terms and conditions on its site.) Aside from buying the card from a reseller, this is the only way to obtain this GPU, which Nvidia said "will not be sold publicly or made available for review."

People who don't win a GeForce RTX 2080 Ti Cyberpunk 2077 Edition for themselves should be able to take at least some comfort in knowing that it has identical specs to the RTX 2080 Ti Founders Edition, though, so its appeal is purely cosmetic.