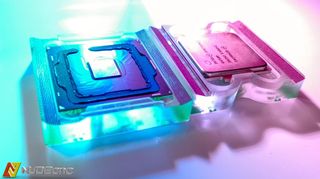 If you're looking to improve your CPU's performance through overclocking, the key is to manage your CPU's temperatures. You can make huge strides by simply installing a chunky CPU cooler, but die-hards often want to take things a step further. A UK company called NUDEcnc has released tools for helping you with just that, and they're dirt cheap.

However, it must be noted that these are not for the faint of heart. The next step after a big CPU cooler is to delid your processor, which involves removal of the metal IHS (integrated heat spreader), so that the cooler can make direct contact with the CPU die. For this, NUDEcnc has the NLAP IHS tool.

If you've completely lost your mind and decided that even delidding (which we already advise against unless you know what you're getting yourself into) is not enough, NUDEcnc also has the Nlap Die, which you can use to very precisely lap your CPU's die. Lapping involves skimming the top layer off your CPU, improving thermal transfer. Typically, the CPU's IHS get lapped as a safer alternative to delidding, so you can imagine that lapping your CPUs die below that is quite... next level. Thankfully, the tool is also good for lapping the IHS if that's the most you're comfortable with.

Of course, we have to give the obvious disclaimer that any of these activities will void your warranty on the CPU, and are entirely at your own risk. While you can get a warranty from Intel on damage from overclocking your CPU, you're on your own if you take things this far.

Nevertheless, NUDEcnc assures us that both tools are built with such precision that they're safe to use if handled with care—they can measure your progress down to 0.01mm accuracy. If by this point you're still interested, you'll be happy to know that risk is the biggest price you'll be paying. The NUDEcnc Nlap Die and Nlap IHS tools cost $20, or $32 for the set.