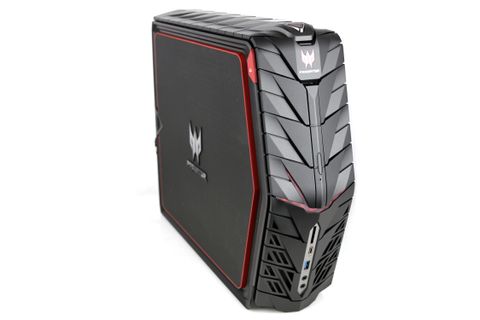 Although we may be able to predict how how the Predator G1’s i7-6700 (with a 3.4GHz base, 4.0GHz boost frequency) will perform compared to an i7-6700K-equipped PC in CPU-intensive applications, we’re still going to see what the Predator G1 can do against the likes of Digital Storm’s less-expensive Vanquish 5 (with a $2,045 MSRP) and its overclocked i7-6700K processor, which reaches an all-core clock rate of 4.4GHz. We also borrowed data from our review of CyberpowerPC’s Syber M Xtreme 400, which has two more CPU cores than both the Vanquish and Predator G1 with its Intel Core i7-6800K processor tuned to 3.8GHz (with up to dual-core operation, 3.5GHz with three or more cores engaged).

Some may feel that placing an i7-6700-equipped PC and a system with an X99 platform and six-core processor on the same scale may be unfairly tipping the scales a bit. However, if you forgive the $63 in premium fans, the CyberpowerPC Syber M is priced almost identically to the Predator G1, and we think that makes it a worthy comparison value wise.

We also used our custom-built Z170 platform to compare the performance of default CPU, memory, and GPU clock rates of an i7-6700K, 16GB of DDR4-2133, and Founder’s Edition GTX 1080 and 1070 graphics cards. Additionally, the GPUs inside the Predator, Vanquish 5 and our test rig feature the same Founder’s Edition clock rates (1,607MHz base, 1,733Mhz boost), and the Syber M features a factory-overclocked EVGA GTX 1080 SC graphics card. We also included the GTX 1070 test rig results to see how a less-powerful GPU with a more-powerful CPU lined up against the Predator G1. The full specifications of our test bench are listed below:

The Acer Predator G1 takes its predictable place in the group in our 3DMark benchmark results, besting the GTX 1070-equipped test rig and falling behind the systems featuring K-series (unlocked) processors with higher clock rates. The Physics test is where the G1 takes the biggest hit, with its lower-clocked CPU placing it dead last against the competition.

Although the Predator G1 only falls behind the i7-6700K and GTX 1080 systems by a small margin, the Graphics test shines a light on the Predator’s overall platform performance, which seems to hamper the G1’s GPU throughput with slightly lower results compared to PCs with the same Founder’s Edition (or reference clocked) graphics cards. The Vanquish 5 and our custom rig are only few points apart throughout the 3DMark benchmarks, but the G1 falls behind by a noticeably larger amount in GPU-focused tests.

The Predator G1 scores a win against CyberpowerPC’s Syber M Xtreme 400 in the single-threaded rendering test in the Cinebench R15 benchmark, which is no surprise considering the 200Mhz difference in peak single-core CPU clock rate (the Syber M’s i7-6800K reaches 3.8Ghz; the Predator’s i7-6700 hits a 4.0GHz turbo frequency). However, the multi-core rendering and Open GL shading tests reward the higher clocked CPUs of the Vanquish 5 and test system, and the higher core count of the SyberM, putting the Acer offering in last place among the tested competition.

The CompuBench Video Processing results speak to the Predator’s shortcomings against more superior configurations, with even our test bench besting the G1 when equipped with GTX 1070. This is because this portion of the benchmark relies on CPU horsepower, and the Predator G1 regains its lead over the Founder’s Edition GTX 1070 in the Bitcoin Mining test. The platform performance drawbacks of Acer’s SFF gaming rig are evident against our Z170 reference system (with a GTX 1080), with the G1 falling behind systems with matching graphics cards when the workload shifts to the GPU.

The 512GB LiteOn CV1-8B512 M.2 SSD inside the Predator G1 is on par with other SATA SSDs, and it even scores better random 4K read speeds than the Syber M’s 512GB Intel 600p NVMe SSD. This isn’t so much a testament to the acumen of the G1’s storage (it still falls behind the Vanquish 5’s Samsung 850 EVO SSD), but rather, the shortcomings of Intel’s budget-oriented TLC NVMe SSD.

Looking at sequential speeds gives the Syber M the edge (although, only by a small margin) over SATA SSD-equipped PCs, and the Predator’s SSD outpaces our reference rig’s Micron SATA SSD and comes close to the Vanquish 5’s storage performance. We excluded results for the GTX 1070, because the GTX 1080 results are from the same system.

Once again, when a workload relies on overall platform performance, the Acer Predator G1 falls behind its similarly-priced competition. The 32GB of memory does the G1 no favors in the Office and Creative scores of the PCMark 8 benchmark, and even the GTX 1070-equipped reference system bests the Predator in these productivity tests.