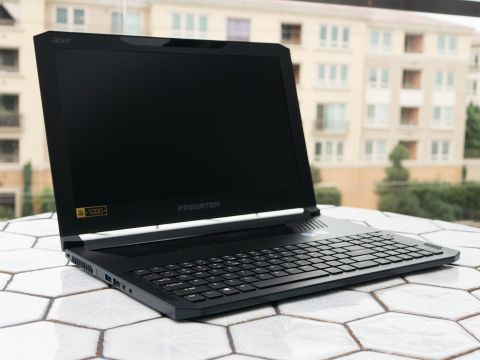 The Acer Predator Triton 700 has upheld all of its promises as far as presentation goes: it's handsomely packaged and is so thin you wouldn't think it's a powerhouse. Don't be fooled. It contains a 7th-generation Intel Core i7-7700HQ, an Nvidia GeForce GTX 1080 with Max-Q design, 32GB of DDR4-2400 memory, and two 256GB M.2 SSDs running in RAID 0. Unfortunately, the Triton's slim design prevents an additional HDD from being installed, so additional storage must be upgraded externally.

If a traditional GTX 1070 is more your style, the MSI GE63VR Raider might fit the bill. It contains a core i7-7700HQ, a GTX 1070, 32GB of DDR4, a 512GB M.2 SSD, and a 1TB HDD for additional storage. Its 15.6" FHD matte display has a 120Hz refresh rate. If gaming performance isn't your main concern, MSI Raider offers considerably more value from its extra memory and additional storage space.

3DMark features a handful of benchmarks with different scenes, which individually test a system’s GPU and CPU prowess. The Predator and Zephyrus are virtually tied, whereas the Aorus X7's unrestricted GTX 1080 delivers slightly more performance during the graphics-oriented tests. The latter's i7-7820HK also grants it an edge in the CPU-based tests, giving it a lead over the i7-7700HQ laptops.

3DMark primarily serves as a prequel to our gaming tests, but Cinebench gives us a peak at a system's computational performance with its single and multi-core tests; the OpenGL test is an added bonus, providing platform-based performance insights, with a bit of preference towards powerful GPUs.

Once again, the Triton and Zephyrus come head-to-head with the Eurocom Q5 and MSI GE63VR Raider, which all have i7-7700HQs. The winner in this round is undoubtedly the Aorus, whose i7-7820HK gives the Triton a 5% performance boost in multi-core performance and a 9% boost in OpenGL shading.

CompuBench has a variety of benchmarks. We use the CPU-based Video Processing test and a GPU-based Bitcoin Mining test.

Once again, the Triton and Zephyrus land in the same ballpark. The Aorus X7 fares much better, scoring 8% higher in VidProc thanks to the i7-7820HK and 9% higher in Bitcoin Mining thanks to the GTX 1080. Stepping down to a GTX 1070 results in a 14% performance loss, and a GTX 1070 Max-Q drops an additional 14%.

We perform an IOmeter test on each laptop’s primary drive to measure basic random and sequential read and write speeds. The Triton features two 256GB SK Hynix Canvas S300s running in RAID 0. The Asus Zephyrus and Aorus X7 both contain a 512GB Samsung SM961. The Eurocom Q5 has a 512GB Samsung 960 Pro. The MSI Raider has a 512GB Samsung PM871. As is typical with high-end laptops, we find ourselves comparing Samsung SSDs.

The Triton's RAID configuration outclasses the single SSDs in 4K random (QD2) read speeds, although it has trouble keeping up in write speeds. Working with small files will be seamless, but the Eurocom's 960 Pro is considerably faster when writing such files. Between the RAID configuration, the two SM951s, and the 960 Pro, 128K sequential read speeds are relatively even, and once again, the Triton's RAID setup is much slower to write.

To approximate a system’s common workday performance, we use PCMark 8’s Microsoft Office and Adobe Creative tests. The tasks are platform-based, and systems with powerful CPUs typically perform the best.

The Triton and Zephyrus come head-to-head once again during the Creative tests thanks to their near identical configurations. Meanwhile, the GTX 1070-based laptops fall to the bottom, but the performance gap isn't substantial. The Aorus features a more robust i7-7820HK, so it performs marginally better in Microsoft Office applications.