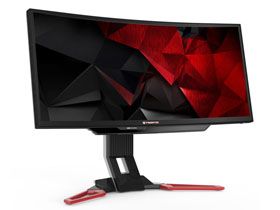 AMVA panels give up a little off-axis image quality to their IPS competition, but are still better than TN screens. The main observation is one of contrast loss and a slight shift to green. There’s still good delineation between brightness steps, but black levels are no longer as impressive. Of course, curved monitors are always best when viewed head-on. The top-down photo is nearly identical to the side shot. But when would you look down on your monitor? The Z301CT’s relatively small screen makes it easy to find the right distance and angle for optimal performance.

The Z301CT’s black levels are extremely low, so any backlight bleed will be very obvious. Our sample had none visible. We were a little surprised at the elevated white field number though. That’s something we don’t see too often. By looking closely at the pattern, we could see a slight hotspot running from top to bottom in the center portion of the screen. That artifact was also responsible for the 2.85dE color uniformity result. The highest errors occurred on the sides with the center pretty much spot-on. These are minor points, because we saw no issues in actual content. But the tests results put the Z301CT near the bottom of the group.

True 200Hz displays are still something of a rarity, so we forgive you if you’ve skipped ahead to this section. We’ll relieve your suspense – the Z301CT is one of the fastest monitors we’ve ever tested. Eclipsed only by the 240Hz PG258Q, it offers a super smooth and responsive gaming experience. You won’t be missing overdrive or ULMB with a 7ms screen draw time. Motion blur is almost non-existent at framerates over 100. And the 24ms input lag score means there is no control latency for even the most talented gamers. The display becomes an extension of your hand, or eye if you’re playing a Tobii-enabled title. In fact, we’ll talk about that right now.

Taken without Tobii Eye-Tracking, the Z301CT is an extremely competent G-Sync monitor. We started with our usual suite of Tomb Raider and Far Cry 4 and found no issues to be concerned with. 2560x1080 resolution means we can max out detail levels in any game and still see framerates well above 100. Our peak in Tomb Raider was 180 FPS from our trusted GTX Titan X—a number we saw on multiple occasions. Overdrive is best left at its Normal setting. Coupled with the high speeds, motion blur was non-existent.

Since ULMB doesn’t harm contrast, we tried it out and had an experience similar to playing with G-Sync. Frame tears are rare at high speeds, but we saw them here and there when moving the mouse quickly. If you can’t use adaptive-refresh for some reason, this monitor works very well as long as the FPS count stays high.

Tobii Eye-Tracking is a whole new experience for us. At its core, it’s simply a new kind of controller. But once you tweak the settings for each individual game, and adapt to its particular response, it truly increases the feeling of immersion. The Tobii Game Hub software has lots of information on each game including a list of specific supported features. Each one is explained thoroughly so the user can make an informed decision as to just how the interaction works and what to expect.

We tried a space-sim first—Elite Dangerous. In any first-person flying sim, the biggest challenge is maintaining situational awareness. Obviously in a real spaceship or aircraft, you’d be swiveling your head around to track enemies or navigate. You can do this with POV hats on your joystick, but having the game’s camera move with your eyes and head is far better. It’s unsettling at first, but once you get the settings right and play awhile, it becomes completely natural.

To stretch our first-person-shooter experience, we chose Ghost Recon, Wildlands. This game allows aiming and marking of enemies with a glance. Early attempts resulted in a lot of player deaths, but after a few hours, we adapted to the point where our skill level was at least equal to what we could accomplish with the mouse and keyboard alone. One cool feature supported here is Clean UI. This removes peripheral information from the edges of the screen, increasing your peripheral view of the environment. If you glance at where an info block should be, it appears instantly. It’s a much better approximation of a heads-up display than we’d seen before.

Prev Page Grayscale, Gamma & Color Next Page Conclusion
12 Comments Comment from the forums
Be In the Know