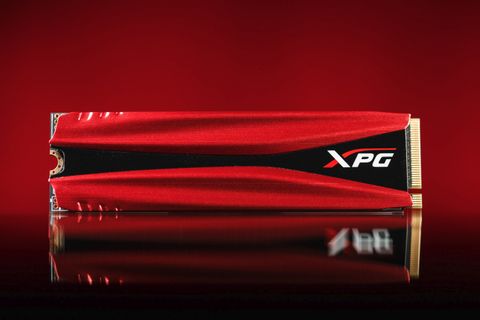 We included the Intel SSD 660p, a newcomer powered by an SMI SM2263 controller and Intel's QLC NAND, in our test pool. It’s a low-cost entry-level product, but it packs a punch. We also have the Samsung 970 EVO, WD Black, and Plextor M9Pe. All these SSDs come with 3D TLC flash and compete head to head with the Gammix S11, but they are pricier. The Samsung 970 PRO, the highest performing NAND-based SSD on the market, and the Toshiba OCZ RD400, which has 2D planar MLC NAND, also made the cut. Finally, we threw in the Crucial MX500 as our mainstream SATA representative.

The Gammix S11 didn't look too good in our first benchmark: Even the QLC-based Intel 660p performed better. The Samsung 970 PRO absolutely crushed all of the other drives, but that wasn’t surprising given its premium price point.

When it comes to gaming, the S11 didn't disappoint. Adata's gamer-focused XPG Gammix S11 outperformed all but the RD400 and Intel Optane SSD 905P. It even beat the Samsung 970 EVO and PRO SSDs.

The Gammix S11 handled mixed read and write file transfers quite well. It averaged 335MB/s during our 50GB file copy test. It didn’t outperform the Samsung 970s, but it more than doubled the Crucial MX500 and was significantly faster than the Plextor M9Pe.

The S11 also took fourth place in our read test with a respectable transfer rate of 2,113MB/s.

We installed SYSmark on the speedy Gammix S11 in just 15 minutes. The drive nearly tied the Plextor M9Pe and was just 9 seconds slower than the Intel Optane SSD 905p. The Gammix S11 flew through our benchmark and did well in our responsiveness test as it once again surpassed the Samsung 970 EVO and PRO.

The S11's 3.1GB/s of sequential read throughput challenged the Samsung 970 PRO up to the 32KB file size. The S11's 1.75GB/s of write throughput wasn’t as impressive, though it was similar to Intel's 660p.

Anvil's Storage Utility is a commonly-referenced benchmark that simplifies the complex IOMETER benchmark and its underlying Dynamo engine with a one-click software wrapper. The Gammix S11 scored a middling 12,707 points in the overall score, placing fifth in our comparison chart.

CrystalDiskMark (CDM) is a simple and easy to use file size benchmarking tool. We measured 3,128/1,738 MB/s of read/write throughput at a queue depth (QD) of thirty-two.

QD1 is more representative of performance in the operating system and common applications. The S11 delivered 1,994/1,531 MB/s of sequential read/write throughput at QD1.

We use the Quarch XLC Programmable Power Module to gain a deeper understanding of power characteristics. Idle power consumption is a very important aspect to consider, especially if you're looking for a new drive for your laptop. Some SSDs can consume watts of power at idle while better-suited ones sip just milliwatts. Average workload power consumption and max consumption are two other important aspects. You might think that lower power consumption is better than high peak values, but performance-per-watt is more important. A drive might consume more power during any given workload, but accomplishing a task faster allows the drive to drop into an idle state faster, which ultimately saves power.

The XPG Gammix S11 wasn’t the most efficient drive in our test pool, but it was definitely not the worst. It averaged 3.81W and hit a maximum of 6.25W during our 50GB file transfer test. That equates to 88MB/s per watt, which nearly tied the Samsung 970 EVO.

The S11 consumed 0.763W with ASPM disabled, but that dropped ten-fold to just 58mW after we enabled the feature.