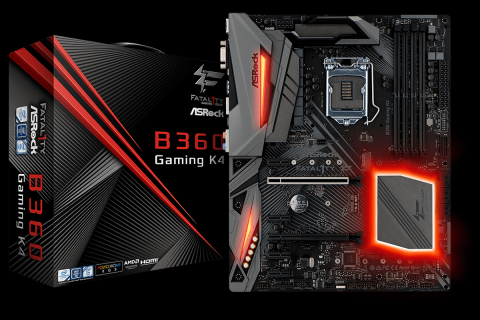 Potential B360 Gaming K4 buyers who can scrape up an extra $5 will find equal or better value than this board in ASRock’s Fatal1ty H370 Performance, which uses the same PCB but a higher-end chipset.

How far can you go when cutting costs, while still appealing to budget-conscious enthusiasts? Intel's B360 chipset, a couple steps down from the Z370 flagship, walks that line well in terms of features. It nixes overclocking and multi-card graphics support, but adds integrated USB 3.1 Gen2 abilities while--in theory at least--making for more-affordable motherboards.

The ASRock Fatal1ty B360 Gaming K4 we're looking at here, however, falls flat primarily because of pricing. For just $5 more, the ASRock Fatal1ty H370 Performance offers better connectivity and more PCIe bandwidth for graphics and speedy NVMe storage. And for this B360 board's $115 asking price, you can even find a few alternatives with the flagship Z370 chipset, giving you all the features that B360 takes away.

Panning out we see an M.2 storage slot behind the top PCIe x1 slot, an M.2 Key-E slot (typically used for Wi-Fi/Bluetooth) behind the second PCIe x1 slot, and another storage slot near the front edge of the board that points towards the bottom two PCIe x1 slots. Sharing starts here, as the second PCIe x1 slot steals a lane from the Key-E slot, which disables its PCIe mode without impacting CNVi availability. The bottom two x1 slots steal lanes from the four-pathway slot above them, kicking it down to x2 mode. The lower M.2 storage slot has only two lanes to start, and steals one of its HSIO (Intel’s flexible High-Speed I/O) pathways from a SATA port, disabling that port while leaving the other five enabled.

The shared circuit board answers any HSIO resource exclusions not fully addressed in our H370 Performance review, since the only things we see missing from the B360 Gaming K4 are two of the second M.2 slot’s PCIe pathways and the second USB 3.0 front-panel header. Missing features that we can’t see so easily are attributed to the change in chipset, as the B360 loses RAID mode, and the second M.2 slot isn't addressed by Intel RST.

Moving up the front edge are the second M.2 storage connector, six SATA ports, and the corner of the board’s dual-port SATA 3.0 header. Four of the motherboard’s five fan headers are switchable between pulse width modulation and voltage-based RPM control, and the same four feature 2.0 amp capacity (boosted from 1A on the PWM-only CPU fan header).

The B360 Gaming K4 has only two SATA ports, which makes sense in the era of M.2 SSDs, but might not work for some builders who are attempting to transfer multiple drives from an older system. An I/O shield, driver disc and printed documentation make up the board's modest in-box accessories.