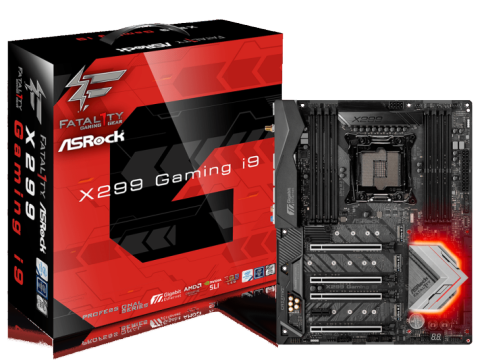 Firmware-default power limits continue to separate X299 motherboards into different CPU multiplier tiers, where Asus’ effort to maintain Intel’s specified 140W TDP resulted in the Core i9-7900X throttling to around 3.5 GHz when loaded with 20 threads of Prime95. Gigabyte’s X299 Aorus Gaming 7 appears to have completely ignored Intel’s stated thermal envelope, running all 20 threads at 4.0 GHz and jumping to around 240W—well past the point that many processors would encounter thermal throttling, given the CPU’s poor internal heat transfer. ASRock’s selections allow the CPU to ramp up to around 190W, but that increase only gives it a multiplier advantage of 1x above that of Asus.

Notice I said default power limits. We enable CPU power-saving features (such as C1E) and disable manufacturer-defined overclocks (so called “Enhanced” Turbo Ratios) in power tests and non-overclocked benchmarks, but we don’t manually configure TDP or current limits. Thoughts about Intel’s feelings on what various motherboard manufacturers are doing concerning power limits will be left to the rumor mill, for now.

PCMark shows odd gains for the ASRock and MSI boards in its Creative test. Perhaps SiSoftware Sandra will shed some light on this difference?

Sandra Multimedia shows ASRock trailing in its Integer x32 test, but leading in its Double Floating-Point Precision test. Conversely, MSI’s sample leads in the former and trails in the latter. The Gaming Pro Carbon AC also leads in memory bandwidth, while the Gaming i9 trails, so we really don’t see any reason for ASRock’s prior gain in PCMark.

The Gaming i9 also leads in the Multi-Core Rendering test of Cinebench, though with no clear reason why. Inconsistency is the one thing that is consistent between these tests, and it’s both easy and convenient to blame differences in default power limits.

The competing MSI sample wins more timed benchmarks than it loses, and ASRock’s X299 Gaming i9 falls in a close match with Asus. These results primarily reflect power differences, but on a smaller scale.

The X299 Gaming i9’s excess power draw is far less excessive than that of Gigabyte or MSI samples. Asus tows the line here for the CPU’s rated TDP.

Comparing a performance disadvantage of less than 1% below the group average to a power savings of nearly 6%, the X299 Gaming i9 has 5.2% above-average efficiency. Asus gets top honors for retaining Intel’s original TDP specification.

The X299 Gaming i9 matches its most closely-priced rival, the X299 Aorus Gaming 7, in CPU overclocking. ASRock’s DRAM overclock is higher, but a look at the bandwidth of that overclock is needed to get the full picture.

Asus has the best overclocked DRAM bandwidth, followed by MSI and then ASRock. At least ASRock was able to beat Gigabyte in this one metric.

A basic value chart only compares performance to price, and we know that the only board we’ve tested so far in the X299 Gaming i9’s price range is the X299 Aorus Gaming 7. Those two boards are nearly matched in that chart.

Buyers who prefer RGB lighting will take a strong liking to the X299 Gaming Aorus 7, but we’ve seen plenty of proof that our readers are split on the subject. The X299 Gaming i9 only has lighting under its chipset sink, and while the LEDs can be disabled on both boards, there’s much less expense going into those of the Gaming i9.

Gigabyte also offers a slightly more configurable slot arrangement than ASRock, with one of its x16-length slots fed by the chipset and the four remaining long slots tied to the CPU. Gigabyte and ASRock are also the two competitors that offer a CPU-fed M.2 slot, but only Gigabyte offers users the option to instead feed those four lanes to a slot. The slot that Gigabyte treats as flexible regardless of CPU, ASRock disables whenever a 16-lane or 28-lane CPU is present.

Gigabyte’s X299 Aorus Gaming 7 looks from nearly every angle to be a slightly higher model motherboard, from its slot options right down to its faster Wi-Fi controller, yet Gigabyte’s board does not have the 10Gb/s network controller of ASRock’s X299 Gaming i9. ASRock added that part without even removing either the two Gigabit Ethernet ports found on the cheaper version of this board, making it a triple-Ethernet solution. Pricing for 10GbE controllers is so high right now that for network geeks, the Gaming i9 becomes a far superior value.

This is where I must make a personal concession: I’m not a network geek, but the price savings of ASRock’s onboard 10GbE, compared to a similarly-equipped PCIe card, is undeniable. While I probably wouldn’t spend $100 more to get its $300 board upgraded, I can perfectly understand why network geeks would like to save over $100 by purchasing a board that doesn’t require the extra card. To them, I say, the (fully named) ASRock Fatal1ty X299 Professional Gaming i9 is a recommended value.

Prev Page How We Test
8 Comments Comment from the forums