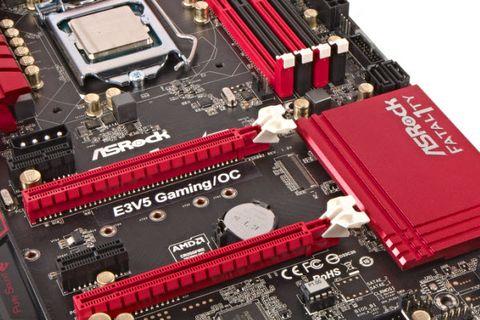 My first Tom’s Hardware Approved Award! Great placement and a decent price earn the ASRock Fatal1ty E3V5 Performance Gaming/OC. If you want to overclock and game while deploying ECC memory, this board will perform!

As my reviews have ascended from low cost AMD platforms to high-end Intel prosumer workstation motherboards, I have gained some perspective about why certain chipsets are marketed the way they are. Features, suitability, and price become trade-offs, but those trade-offs aren't always simple or easily understood.

The C232 is Intel’s attempt to bring the current generation Xeon brand to the masses. But is this where Xeon belongs?

C232’s main goal is to enable builders with ECC memory and other workstation-centric features missing with the Z170 chipset. But reduced PCIe options and noticeably less USB connectivity tend to nudge shoppers to the shinier and prettier Z170 or cheaper H170 chipsets. With these concessions in mind, is there room in the market for a budget-oriented workstation platform? Is the ASRock E3V5 Performance Gaming/OC motherboard a prosumer’s middle ground?

The ASRock E3V5 Performance Gaming/OC motherboard is not new to Tom’s Hardware. It was featured in a System Builder Marathon. And it is about dang time that we give it the close inspection it deserves.

Just like the ASRock 990FX Killer we reviewed last year, this board appears to be a no-frills gaming focused product. It looks clean and simple at first glance of the spec sheet, but upon physical inspection plenty's missing. This I/O panel is very sparse with plenty of component pads to match, but with the C232 chipset, the connectivity just isn’t available. Regardless, this backplate has the bare minimum needed for a standard computer: one PS/2, five-port audio, SPDIF, Ethernet, and six USB ports of various speeds.

Browsing the planar we observe yet another missing component: the M.2 between the PCIe x16 slots. There are two PCIe x16 slots and three open ended flexible PCIe x1 slots, but beware: the second x16 slot only has connectivity to four lanes. With that limitation, this board only supports Crossfire for dual GPU configuration.

Regardless of these missing features, we do enjoy the component placement. The two lonely SATA ports seemed off at first, but this is useful for those who like to segregate their storage connections. Six four-pin fan headers are scattered across the planar, and a USB3 connector is placed further up the board allowing for shorter case cables to reach the port. All in all, this motherboard appears to be well suited for the inner gamer in any prosumer.

Upon installation and deployment, we ran into only one snag. It turns out, when this sample was used in the System Builder Marathon, it only had two DIMMs installed. Since we needed all four slots populated, we had to upgrade the firmware from P1.0 to P1.5. Once that was installed, all 32GB were detected and benchmarking could resume.

Comparing the UEFI options to that of the C236 Gigabyte X170 Extreme ECC is like comparing night to day. C236 has access to far more options than the C232, and Gigabyte flaunts it in such a clean manner. However, this ASRock E3V5 Gaming/OC is all about prosumer gaming, and where it doesn’t have the workstation-esque options it has overclocking!

This generation of Xeon is not supposed to be overclocked, and Intel forces that hand by locking multipliers. ASRock has built into its UEFI the ability to overclock using the BCLK frequency and has provided access to a slew of other options to stabilize the increased reference clock. Though it's not as straightforward as K-series processors, we found it to be easy enough.

The overall theme of this UEFI is like other ASRock Fatal1ty branded boards, with black and red filling the screens. The standard screen provides a decent dashboard look, though I prefer the traditional BIOS formatted screen. Ample descriptions to UEFI options are provided, which is a plus for those comparing against the consumer grade options.

Next Page Test Configuration, Results, And Final Analysis
10 Comments Comment from the forums