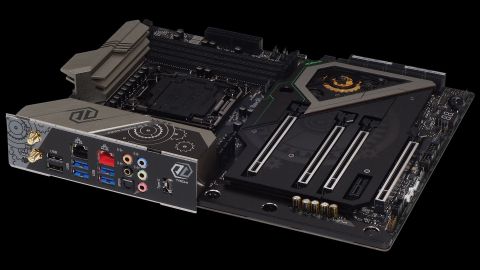 We were a little surprised when we first learned that Intel would be using its X299 chipset for its “10th-gen” HEDT (High-End Desktop) processors. Even as its mainstream platform was updated from a rehash of the four-year-old Z170 to a modernized USB3 Gen2-supporting part, the HEDT platform appears stuck with the same badge-engineered variation of its previous tech that we’ve had from LGA 2066 inception back in mid-2017. Dealt by Intel pairs of duces and threes, ASRock is hoping for a full house with the X299 Taichi CLX.

Much of the above-mentioned connectivity is hidden behind an integrated I/O shield, which conceals the AX200 and ASM3242 riser cards for which Wi-Fi and USB Type-C connectors are visible. Between these are the Gigabit and 10GbE networks ports, five analog audio jacks, digital (optical) audio output, four USB3 Gen1 ports, and two USB 2.0 ports.

The ALC1220 controller includes a DTS Connect license for live streaming multi-channel audio through the digital output to compatible receivers, and the chipset’s lack of modernity is responsible for the USB 2.0 ports. Not that we mind: Keyboards and mice don’t benefit from higher-speed interfaces.

Oh, and let’s not forget the recessed CLR_CMOS button that helps overclockers recover from a bad config without tearing their system apart.

The use of an elder chipset helps to assure buyers that only a firmware update is needed for older systems to support new processors, but none of those older X299 boards can address the extra four available PCIe 3.0 lanes provided by Intel's brand-new silicon. Indeed, several of the “new” boards we’ve seen announced have the same issue, leading us to believe that those were simply minor revisions of previous products. Conversely, the X299 Taichi CLX has a properly freshened design that applies those four lanes to the second PCIe slot.

Rather than lay out its slots to support four double-slot graphics cards, ASRock treats that second x16-length slot as a storage option. The highest possible slot space is instead occupied by an M.2 slot and covered with an aluminum shroud, as is the blank-looking space between the first and second PCIe slot. And this gets back to treating the second PCIe slot as a storage option: Its eight lanes are shared with the aforementioned M.2 slots, so that installing an eight-lane PCIe M.2 adapter becomes a preferable option to removing the entire cover panel every time you’d like to access a drive.

The upper half of the X299 Taichi CLX has four DIMMs, three fan headers, two EPS12V connectors feeding a 13-phase voltage regulator, aRGB, standard RGB, and USB3 Gen2 front-panel headers, The bottom  of this board is more complex. We see a bunch of PCIe switches near the upper two slots that help the board negotiate traffic down to those lowly 28-lane CPUs (x16/x4/x8/x0, if anyone cares), a third M.2 interface that’s connected to the X299 PCH, ten SATA ports of which two share a single PCIe lane through a ASM1061 controller, and even an open-ended PCIe x1 slot that appears to have enough space to hold at least an x4 card and 2280 M.2 card simultaneously, which is great since that’s the only M.2 cover that can be removed separately.

Along with the board itself, the X299 Taichi CLX includes a software disc and print documentation, a legacy SLI bridge, four SATA cables, a Wi-Fi antenna, several M.2 screws and a case badge.

Next Page Software, Firmware And Overclocking
No comments yet Comment from the forums
Be In the Know