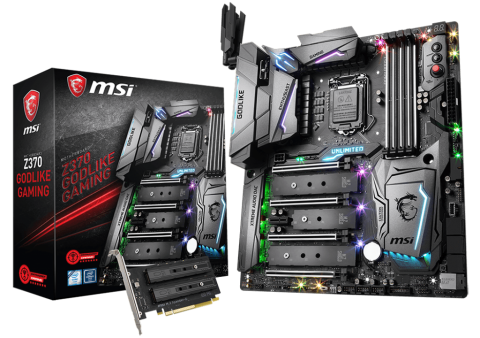 We collected a second Core i7-8700K data set for today’s motherboard analysis, and the review of the contributing motherboard is forthcoming. Data from the 8700K’s predecessors is an average of all previous tests from this lab, which includes every Z270 and our initial batch of X299 motherboards (later X299s were tested exclusively using the higher-model 7900X).

Synthetic benchmarks are great tools for finding weaknesses in specific hardware or configuration errors, but in the era of X299 platforms they’ve also highlighted the manner in which most enthusiast-class motherboards ignore Intel’s specified TDP, even when all of the CPU’s power management technologies are enabled. CPUs that lack that tendancy typically perform very similarly across different motherboard models, unless one of the manufacturers has snuck in an overclock.

The Z370 Godlike Gaming appears to be clocked a little higher than the Z370 Aorus Gaming 7, and that’s indeed the case: MSI’s 100 MHz BCLK is actually 100.5 MHz, which doesn’t sound like much, but the test result differences aren’t that big either. Clock differences are far greater for the earlier Core i7-7800X, which shines only in applications that can leverage its quad-channel memory bandwidth.

Talos Principle is supported by Nahimic audio solution, and while the software adds some nice virtualized 3D and even a handy tool to show you the direction from which a noise emanated (such as an opponent’s footsteps), it taxes the game’s framerates. The faded portion of the Z370 Godlike Gaming’s chart bars show the FPS available after disabling the audio software.

The Z370 Godlike Gaming’s slight overclock pushes it to the forefront of most timed applications, although the Z370 Aorus Gaming 7 beat it in After Effects. Then again, so did the Core i7-7700K.

The Z370 Godlike Gaming is a real miser compared to the Z370 Aorus Gaming 7. Z270 tests include “lightweight” boards in compact form factors and lower feature markets (remember, it's an average), and the Godlike Gaming’s additional controllers can each eat several watts.

The Z370 Godlike Gaming’s lower power consumption enabled lower heat and better efficiency compared to the Gigabyte board. Meanwhile, the poor efficiency of the Core i7-7800X shows why buyers should consider the upgrade only if they need the extra PCIe lanes or additional memory bandwidth.

We’re accustomed to additional cores limiting our overclocks, yet the six-core Core i7-8700K used in our Z370 tests clocks better than the quad-core Core i7-7700K. We don’t see a difference between motherboards either, and having approached our thermal limit, couldn’t have appropriately applied more voltage.

We started adding an overclocked memory bandwidth chart after realizing that some manufacturers were using extremely loose secondary and tertiary timings to top the O/C chart. We don’t see that problem in any of the current boards, although Gigabyte does a better job than MSI of retaining the performance advantage of its memory O/C.

The Z370 Godlike Gaming has so many added features that it targets a higher market than the Z370 Aorus Gaming. Were we to go feature-by-feature through the list of triple gigabit Ethernet networking, plus Wi-Fi, four-way CrossFireX, Nahimic Audio (for those who use it), a freebie Rainbow light strip, an included USB 2.0 hub, and even PCIe x8 to dual M.2 adapter card, we’d still have a hard time justifying its doubled price. That still leaves room for an Editor’s Choice award however, since those are based only on product superiority.

Unfortunately, a plethora of features must be disabled so that others may be enabled, due to the limitations of Intel’s Z170/Z270/Z370 chipset (the rumored “hidden lanes” of the Z170 were made active in the Z270, and the Z370 doesn’t even pretend to be a new development). Those who can’t understand the true constraints of the Z370’s 30 HSIO connections need only look at the chart MSI publishes in its Z370 Godlike Gaming manual:

Those aren’t switching hubs folks, they’re regular “or” type switches. In fact, the only two ways we could think of to enable all Z370 Godlike Gaming features simultaneously would have been to use a giant 64-lane (PEX 8764) multi-casting switch, or to split the CPU’s lanes into x8/x8 and use separate switching hubs for the card slots and M.2/U.2 slots. I’m not even sure the CPU would support booting M.2 through such a device. And that just means that if this editor had to choose an ultimate motherboard based on these integrated features, the chosen board would need a 44-lane CPU. Fortunately, this editor’s needs aren’t that grand!

If all you need is a 6-core CPU, and you’re willing to pay for an abundance of features that can’t all be used at once, we have great news: The Z370 Godlike Gaming’s feature set is far above the average of X299 motherboards, and the savings on CPU cost puts it within reach. The Z370-compatible Core i7-8700K is also clocked much higher, and even overclocks better than the X299-compabile Core i7-7800X. It’s a great board with features that exceed the limitations of incorporation.