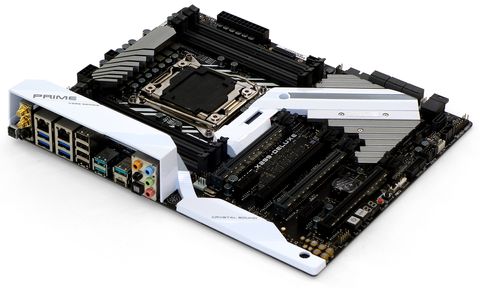 The Asus AI Suite still does nearly everything from Windows that users would like to do from BIOS, and the most amazing thing is that it worked on this hardware and firmware. Most companies require a few revisions to get custom software and firmware to work together following a major hardware change.

AI Suite also has fan tuning, energy optimizing, and even drive cleaning software, which may be even more useful when you’re done playing with performance settings. There are also a few menus that aren’t applications so much as shortcuts to other applications, including Windows settings.

Asus Aura still controls both onboard and externally-connected RGB lighting.

Asus LiveDash allows users to configure report messages for the tiny OLED display at the motherboard’s center. Unfortunately, I broke the application while overclocking.

Asus Turbo LAN is its customized interface for the cFos packet prioritization suite that most of the large motherboard manufacturers have included for previous generations of enthusiast-class motherboards.

DTS Headphone X provides a variety of synthesized 3D environments for a host of different headphones.

Prime X299-Deluxe firmware opens to its EZ Mode GUI by default, which includes a few boot, basic fan, and XMP Enable settings. Using the keyboard’s F7 function brings up the Advanced menu, and users who frequently visit Advanced settings can set it to automatic access through its own boot settings submenu.

We started tests with the Core i9-7800X, and the Prime X299-Deluxe pushed that processor to an amazing 4.646 GHz using nothing more than a dual-fan liquid cooling kit and somewhere around 1.25V CPU core. Core voltage settings are not as simple as they appear, however, as the core voltage appeared to climb over 1.25V under extremely heavy loads no matter how low it was set.

We found both automatic and manual switching between PWM and voltage-based fan speed control across all eight of the Prime X299-Deluxe’s fan headers, and if eight isn’t enough, Asus includes its own four-fan breakout panel that increases X299-Deluxe support to 12.