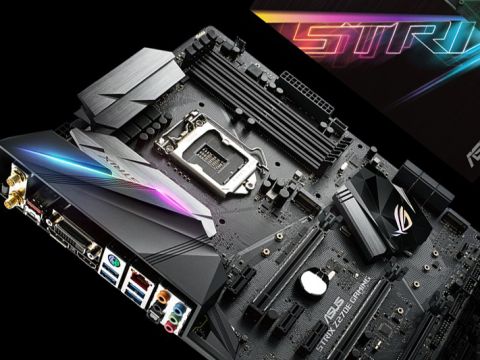 I’m thrilled to report that we didn’t find anything exciting in our synthetic benchmarks, which are the metrics most likely to ferret out any configuration problems. That means we can move on to the next set of tests, rather than slogging through diagnostics. The only boring difference that’s at least notable is the slight memory performance deficit of the previous-reviewed Fatal1ty Z270 Gaming K6.

As previously describe in its review, MSI’s Z270 Gaming M5 suffers a humiliating setback in Talos when its Nahamic 2 software is enabled. That leaves the Asus ROG Strix Z270E Gaming in second place, with far smaller deficits across several titles.

The Z270E Gaming takes slightly more time than two of the other motherboards to complete our timed applications, but the difference is still very small.

Average performance differences were not great enough to offset the energy-to-efficiency ratio, leaving the second best power miser ROG Strix Z270E Gaming as the second most efficient motherboard. Conversely, an early fixed-core-voltage firmware led to a poor efficiency score for the Aorus Z270X-Gaming 7.

A quick look at the data rates of those memory overclocks shows the MSI and Aorus motherboards well optimized for O/C memory performance.

The second most expensive motherboard in today’s lineup, Asus’ ROG Strix Z270E Gaming takes second place in performance-per-dollar. There just isn’t much extra performance to be gained by spending more money, and features separate the high end from the low cost boards. So are the Strix Z270E Gaming features worth somewhere in-between those of the Z270 Gaming M5 and Z270X-Gaming 7?

The ROG Strix Z270E Gaming costs $40 less than the Aorus Z270X-Gaming 7, yet comes up short of it only by a minor amount in DRAM overclocking, and primarily lacks the Gaming 7’s Thunderbolt 3 controller. The Strix includes a Wi-Fi controller, which is a reasonable dollar-for-dollar replacement for Aorus’ second network controller, but several lesser features, including onboard buttons and a diagnostics code panel each add to the Gaming 7’s value. If you’re among those who think the Gaming 7’s SB Recon 3d is worth just a few dollars more than the Z270E Gaming’s ALC1220, the two are fairly close in a features to price comparison.

The Gaming M5 has a U.2 connector, but comes up short of the Z270E Gaming’s Wi-Fi and extra USB 3.1 controller. The Gaming M5 also has a diagnostics code panel, and it costs around $10 less. The Strix motherboard appears to be a slightly better per-feature value in this case, unless you’re one of the few people who would need to buy an M.2 to U.2 adapter to use it with your bay-mounted NVMe drive.

Of all three products, only the ROG Strix Z270E Gaming includes a front-panel USB 3.1 (Gen2) port. This is going to be increasingly important as we see new cases that include the new cable (not to be confused with previous cases that used a USB 3.0 cable interface for a Type-C connector and call it USB 3.1 via Gen1 transfers). With at least equal value compared its closest competitors and an added feature important for next-generation cases, the Strix Z270E Gaming gets our stamp of approval.