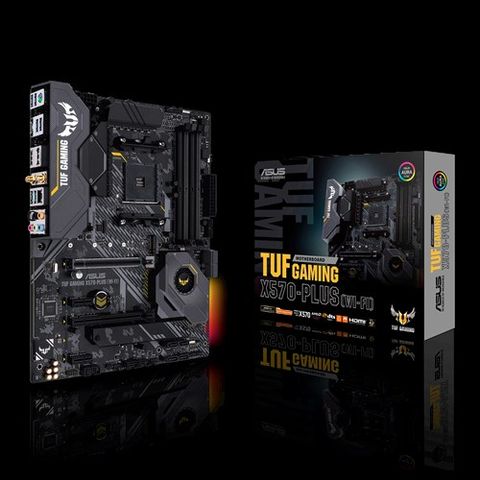 The Asus TUF Gaming is one of the least-expensive boards available on the X570 platform,but manages to include a USB Type-C port as well as Wi-Fi, and RGB LED illumination near the chipset heatsink. Stock performance was comparable to the other models, and overclocking worked well on our review sample.

Asus’ TUF lineup has changed from the ultra-robust, heavy shielding it was known for in years past and has evolved more toward gaming-centric boards with protection on individual parts such as the PCIe and DIMM slots. ESD guards, additional surge protection measures and military-grade components are still a part of the TUF lineup, but the additional hardening went beyond what was necessary for most use cases. These changes have made the Asus TUF Gaming X570-Plus Wi-Fi the second-least-expensive  board in the Asus X570 product stack, with the X570-P at $170 taking the entry-level spot.

The TUF Gaming X570-Plus Wi-Fi’s $200 price will help buyers who want to purchase the flagship chipset and all that it offers, while leaving room in their budget for other important parts. Asus accomplishes this by not using ‘value adds’ like an integrated rear IO  plate or loads of RGB lighting. The X570-Plus Wi-Fi handled overclocking our Ryzen 7 3700X without a complaint and performed well in our benchmarks at stock speeds, making it a good base to build a new AMD Ryzen 3000 series system.

Like other X570 motherboards, the Asus TUF Gaming X570-Plus Wi-Fi supports both Ryzen 2000 and Ryzen 3000 series processors. It includes eight SATA ports and four DIMM slots capable of supporting up to 128GB of DDR4 RAM, although curiously, overclocked memory speed support is not listed. For networking and audio, we find a Realtek L8200A GbE NIC and Realtek ALC S1200A audio codec (albeit an Asus’ tweaked version), which is capable of  7.1 surround and DTS ausio. Below is a complete list of specifications from Asus.

Included accessories are minimal, as we would expect on a budget level motherboard, but the basics are covered. Here’s a list of what ships in the box along with the board.

As far as looks go, the X570-Plus Wi-Fi looks the part of recent Asus TUF Gaming based boards. The PCB is jet-black with a lined pattern making its way from the bottom-right corner through the left VRM area and rear IO. The rear IO shield has TUF Gaming branding on top with some yellow accents scattered throughout the board.

The DIMM slots alternate black and grey, in keeping with the overall visual theme of the board, giving some accent to the all-black PCIe slots. Additionally, the top slot is protected with Asus Safeslot metal wrapping. Other connectors and slots are black, except for the RGB headers.

On the RGB LED front, the TUF Gaming has a minimalistic approach. To the right of the chipset heatsink, where we’d normally find the SATA ports, is where the LEDs are located. The LEDs themselves are on the bottom side of the board and shine through the lined pattern making for an attractive effect. Control over the integrated lighting and any strips attached to the headers are handled by the company’s Aura Sync software.

The X570-Plus Wi-Fi shouldn’t have any issues matching most build themes. It does indeed have a bit of the yellow color and branding that will stand out a bit, but they are accents more than dominant features. The pattern across the middle of the board is going to be the most polarizing aesthetic feature, as some prefer a more plain appearance.

Focusing in on the top portion of the motherboard, we can see a better view of the VRM heatsinks, shroud, and some of the headers found there. We won’t find RGBs under the plastic IO shroud, but the TUF branding is represented on this shroud, letting everyone know where the board came from. In the accessory stack, Asus also includes a couple of stickers for the battery as well as on the chipset fan hub, just in case you wanted to go all-in on the TUF branding.

The VRMs are covered by decent-size heatsinks which did the job at stock, Precision Boost Overdrive (PBO) and while overclocking. Asus states a 12+2 VRM setup, but the board has a ‘true’ rating of 4x3 + 2, since the controller, the ASP 1106GGQW is a 6-phase unit in 4+2 mode. Power is fed to the VRMs through a required 8-pin EPS connector, plus an optional 4-pin which will provide more than enough power for the Ryzen 3 CPU lineup. I’m not sure how overclocking would go on the beefier chips, especially the 3950X, but the TUF board held up just fine with a 3700X.

To the right of the socket area are four DIMM slots in that black/grey color scheme mentioned earlier. Just above them, we can see two fan headers (CPU and CPU_OPT), along with a standard 4-pin RGB header in white. All six fan headers on the board support both PWM and DC (4-pin and 3-pin) fans. The fan header count is more akin to a mid-range board than a budget model. To the right is the 24-pin ATX connector which feeds power to the board. The second (of three) RGB headers -- this one is addressable RGB -- is located just above the ATX connector.

Last in this area is the debug LED, which lights up during the POST and boot process. There are four LEDs, DRAM, CPU, VGA, and Boot. If there is a problem when the system is on its way up, wherever the problem is the LED will stay lit. This a useful tool for troubleshooting issues before entering Windows and a less-expensive alternative to a two-digit debug LED which shows codes. This is a nice feature for this price point.

On the bottom half of the board, the left side houses all the audio bits. The Realtek S1200A 7.1 channel chip is hidden under the metal Faraday cage with the TUF symbol on top. Below that are five Chemicon Japanese audio caps. The audio bits are separated from the rest of the motherboard to further reduce EMI and improve sound quality. At this level, users will not typically find op-amps and high-quality audio, but for most, the mature ALC 1200 will be sufficient.

The PCIe area consists of two full-length slots and two x1 slots. The primary GPU slot is protected by the Asus Safeslot, with metal surrounding the grey connector, while the others are black. As far as bandwidth goes, the primary GPU slot runs at PCIe 4.0 x16 while the secondary full-length slot runs at PCIe 4.0 x4 speeds. The x1 slots run at, you guessed it, x1 speeds. This is a typical configuration for this class of board and the X570 chipset.

Also found in this location are two M.2 slots. The top slot sits above the primary GPU slot while the second is below the secondary PCIe slot and has a heatsink. Both slots support PCIe 4.0 x4 NVMe as well as SATA-based drives and will fit M.2 modules up to 110mm in length. If you use an NVMe based drive, either PCIe 3.0 or 4.0, install it under the heatsink, as fast drives tend to run hot and can throttle in heavy use scenarios.

The chipset heatsink takes up a bit of real estate and like many X570 boards has a small fan to keep the 11W chip below it cool. The fan was inaudible over the video card fans in our setup, so there are no worries there. To the right and below the chipset heatsink are eight SATA3 6 Gbps ports. Four of the slots are closer to mid-board, while the other four are located on the bottom of the board -- an unusual setup which should still be easy for cable management. Where the SATA ports are typically found, directly to the right of the chipset heatsink, is where we find the sole RGB LED location and its diffused light shining through the PCB.

Across the bottom are several headers which include the 3rd RGB header, front panel USB header, along with another (of six) fan headers. There is nothing out of the ordinary to report here, so here’s a bulleted list of the other headers.

Last but far from least is the rear IO. Unlike the Gigabyte X570 Aorus Elite we recently reviewed, the Asus board here uses the less-expensive IO plate instead of a more-attractive integrated unit. This shouldn’t matter to most as it is the rear IO and typically rarely seen.

On the rear IO itself, there are a total of seven USB ports, three of which are USB 3.1 Gen 2 (the Type-C port and the two aqua-colored Type-A ports). The other four Type-A ports are USB 3.1 Gen 1 flavor. If you have a PS/2 mouse or keyboard, there is a port for that as well. Also located on the rear IO are the Wi-Fi antenna headers, the Realtek L8200A LAN port, as well as a 5-plug audio stack with SPDIF. If you’re using an AMD APU and need video outputs, HDMI and DisplayPort here have that covered.