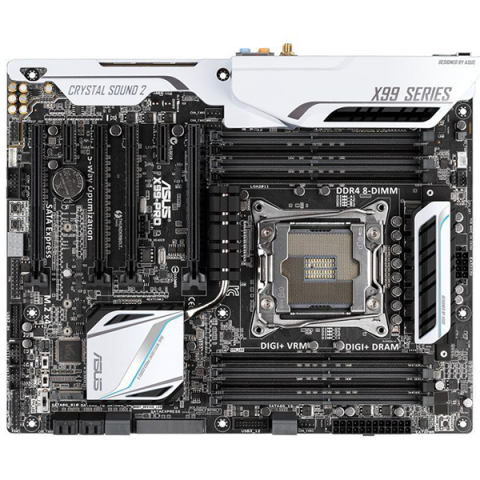 The value chart is skewed because we tested middle-of-the-pack X99 motherboards first. Were we to subtract the $50 Wi-Fi solution from the X99 Pro’s price, it would rise to 95% of average value. Since the wireless controller can be added on to other products, what makes the rest of this board worth 5% more than its mainstream rivals?

The ASRock X99 Extreme4 lacks a few PCIe pathway switches that it would need to properly support three-way SLI on a Core i7-5820K, but then again, so does the X99 Pro. And both of these boards disconnect that third card whenever a PCIe-based SSD is installed. At least ASRock has the single-port SATA connection as a backup plan.

Though earlier discounts have disappeared, Gigabyte’s X99-UD4 can still be found for $244. What it lacks in third-gen PCIe x4 M.2 support it makes up for in four-way SLI. Not three-way; four way. Even if you were to add Asus’ “Hyper M.2 x4” card to Gigabyte’s board, it would still support three-way SLI. It also lacks the X99 Pro’s PCIe 2.0 lane-sharing conundrum, though adding a PCIe Wi-Fi card would cost you a slot.

If we continue to consider the Wi-Fi card separately, we see that MSI’s X99S Gaming 7 is the only board with both PCIe 3.0 x4 M.2 and slot sharing issues to rival those of Asus. Rival doesn’t mean match though. The X99S Gaming 7 only drops its fourth slot for M.2. It still retains three-way SLI support through the third slot, even when a 28-lane Core i7-5820K is installed.

That leaves me with a challenge. How can I recognize my favorite board with an award when it doesn’t live up to some of the capabilities of its cheaper rivals? And why would I say this is my favorite board in spite of its nonsensical slot configuration?

The X99 Pro gave me the best overclocking experience on X99, bar none. And I don't need features like dual-ROM (none) or backup ROM (none). Instead, I care that someone took the time to just make the firmware work. If you overclock too far and crash, the failure is detected and the board reboots at safe settings nearly every time. Even if you screw that up, you can usually just force a power cycle to get the X99 Pro to sense a problem. The firmware guys on this project did things brilliantly two months ago, and that explains why Asus hasn’t needed to publish an update. The same brilliance extends to DRAM overclocking, where the X99 Pro supports more multipliers, higher multiplier and higher data rates than anything else I’ve seen.

The X99 Pro became my favorite in practice because my most recent projects were DRAM reviews. Were I to spend more time thinking about the features I want in my own machine, aggressive DRAM clock would fall far down the priorities list below proper slot function. The X99 Pro would likewise quickly fall down my list of favorites. That’s a harsh answer that even the readers of our “Best Motherboards” article will need to live with when asking “where are Asus’ X99 boards?”