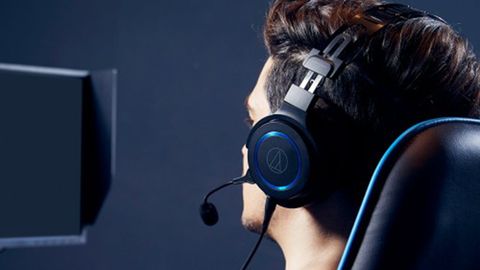 Audio-Technica shows off excellent sound quality with the premium-priced ATH-G1 gaming headset and achieves it with a distinctive, powerful tone.

Japanese audio specialist Audio-Technica has made big strides in the gaming headset market in recent years with their ATH line. With the ATH-G1, (as well as its slightly pricier wireless counterpart, the G1WL), the traditional headband design returns and holds together a headset offering premium sound quality - for a premium price.

Available for at $169/£159 at the time of writing, the ATH-G1 is in the upper echelons when it comes to price tags, and a glimpse of the spec sheet reveals why. Massive 5Hz-40KHz range easily capable of hi-res audio reproduction, a lightweight 0.6 pounds and an understated look that makes the ATH-G1 pass for street-ready headphones when the mic’s detached. What’s not to like? Of course, quite a few gaming headsets make similar promises, and as we often find during testing, the devil is in the details.

When you first pull the ATH-G1 from its box, you notice two things about it. One: it’s extremely light, and two: in order to hit that lightweight 0.6 pounds, it made a few compromises in terms of visual appeal.

This doesn’t have the obvious look of a premium headset. Its brushed aluminium headband gives the impression of having an exterior cover missing, and while the design is obviously created with weight-saving in mind, it lacks a bit of finesse in terms of the execution.

Placed on this reviewer’s slightly smaller-than-average head, though, this more traditional padded headband design worked better than the previous two-pad suspended design on ATH cans. It sat more tightly without digging in, and making adjustments was easier. Due to the exposed wiring running between each earcup and along the headband, there’s a small chance of nipping the wire in the moving parts, but it hasn’t happened so often that I'd flag it as a serious flaw.

The rubberized cable, along with the perfunctory inline control with volume and mic mute operation, are a bit of a disappointment too. A braided cable would have been much more in keeping with this price range, and the inline controls feel like those of a headset a third of the price.

The earcups themselves are built around a closed-back design and keep things simple and elegant with a single metallic blue ring detail and a matte Audio-Technica logo on each cup. The foam padding is finished in leatherette siding and breathable fabric contact pads, and although it doesn’t feel quite as soft as some memory foam pads on HyperX headsets, it’s ample. There’s little to no creaking sound when rotating the earcups, and they feel smooth and sturdy enough to sustain many months of regular wear without problems arising. Thanks again to that super-light weight, this is a headset you can wear for long sessions and almost forget you’re wearing it, with only the accumulating heat in the closed-back earcups giving it away.

Overall, the design is comfortable and light enough for pro gamers and demanding enthusiasts alike. It’s just a shame Audio-Technica didn’t find a way to convey ‘premium-grade headset’ a bit more clearly with the construction materials and design.

It’s clear almost immediately that Audio-Technica is setting their stall out primarily on the sound quality of the ATH-G1. Built around a pair of 45mm drivers, the closed-back earcups offer a veritable wall of low-end power, even at lower volumes, and turn previously innocuous audio sources, like car engines and drops in EDM songs, into all-out assaults on your cochlea. Turn it up, and you get into ‘feeling the sound’ territory, rather than just hearing it. Quite an experience.

At higher volumes, the delicacy and articulation of the high-end details came through really well, too. Elements, like a ride cymbal, hit in songs. Footsteps in games weren't drowned out by the bass, but instead sparkled over the top of it. Of all things, it was a pre-roll YouTube ad that I first sampled the ATH-G1’s delights on, and I've never heard a ukulele sound so authoritative. In these moments, with the volume cranked and a nice lossless audio source blasting through the headset, that $169 price makes total sense. The sound doesn’t break up at max volume, which is slightly quieter than the norm and roughly equivalent to that of the Steelseries Arctis range.

There’s no other gaming headset on the market that sounds quite like these, though. It’s definitely not the flat response, studio monitor-style sound you might have expected from Audio-Technica before they entered the gaming market. And while my personal preference usually skews towards a flatter sound, I really loved the exaggerated, dramatic tones of these ATH-G1s. The bass could be tighter, but the drivers’ ability to retain all the details higher up the frequency range really made it a delight, especially when listening to music.

However, at lower volumes the ATH-G1 doesn’t sound quite so lithe and articulate, and the bass starts to take over. Audio-Technica doesn’t currently offer a software program, like CUE (Corsair Utility Engine) or the Steelseries Engine, to tweak EQs with, so you’re stuck with that booming bass - or at the mercy of Windows equalizer, which is really just another way of saying the former.

The choice is stark, then: pump up the volume, probably at the expense of your long-term aural health, and enjoy the glorious symphony, or roll it off and make do with a slightly muddy sound. There’s no easy answer to that, but let’s just say we’ve been asking people to repeat themselves a lot more often since we started testing the ATH-G1.

When it comes to the microphone, the ATH-G1 is an able performer. The mic noise cancellation is set just right to minimize keyboard clicks without clipping away your speech, and for a small detachable it picks up low-end frequencies well. It also stays in place reliably too, so you don’t find yourself fiddling with it mid-session. The fact it’s entirely detachable is probably our favorite feature though, because this is definitely a headset we’d use in the long term with our smartphone (note that the 3.5mm input will need an adapter for use with newer iPhones and Android models). The wireless model definitely has the advantage there.

Gaming headsets don’t need to bestow a whole suite of added extras on you, and Audio-Technica is clearly aware of that. The total package for the ATH-G1 consists of the headset, cable, audio/mic splitter cable and detachable mic. And… that’s it. Truth be told, I can count the times we’ve ever used a carry case or swapped out one set of ear pads for another on one hand, so I don’t miss extras like that. However, the inclusion of something along those lines would have been a good opportunity to justify the headset’s price.

As mentioned above, there’s also no software available for tweaking EQ profiles, mic behavior and the like, making this a fairly barebones package. Again, it’s all about the sound quality. I was able to flatten the response a little using Windows Equalizer, boosting the mids and upper mids manually by about 6db, but it’s a real pain to manipulate the sound this way. Having a few presets to scroll through would have taken away the heavy lifting.

I can’t shake the feeling that the Audio-Technica ATH-G1 should include a bit more luxury in its look and feel for the price, but I just can’t argue with the sheer enjoyment it offers with its powerful sound. It’s a hardwired EQ profile very much designed for drama and spectacle rather than serious audio scrutineering, like mixing work, but it’s very good at its chosen specialty.

I'm a bit disheartened that the clarity and vibrancy really rolls off at lower volumes, though, and this trait combined with its bass-heavy response means the ATH-G1 isn’t ideal for serious competitive gaming, where long low-volume sessions to minimize fatigue are common and absolute positioning precision is required.

The pricier wireless model, the G1WL ($249), is better suited for on-the-go audio. However, the ATH-G1 is really a headset with one eye on gaming and the other on shrugging off its mic and hitting the streets with you while you listen to some tunes - that’s the real strength of this package.