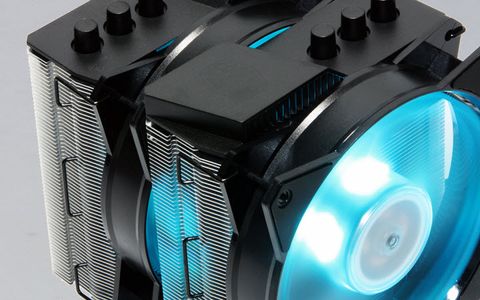 Using detailed data collected from previous cooler tests, we’re able to provide comparison charts and evaluations of the Cooler Master MasterAir MA620P with coolers similar in both design and price range. All CPU cooler tests are run on our six-core, Intel i7 5930k overclocked to 4.20 GHz at 1.20v inside our Corsair Graphite 760T chassis. Up for comparison are the FSP Windale 6, Arctic Freezer 33 eSports Edition and the be quiet! Dark Rock 4.

The Cooler Master MasterAir MA620P posts the hottest average CPU core temperatures of the comparison group. Even with its overall large size, dual cooling towers and twin fans, it would seem the MA620P has some problems effectively dissipating thermal loads.

Reported fan speeds are precisely in range for their advertised speeds with the maximum just over 1800 RPM.

While it did not post the fastest rotational speeds, the MasterAir MA620P did post the highest registered noise level at just over 30 adjusted decibels. While this is still whisper-quiet, it isn’t nearly the silence afforded by the FSP Windale 6 or be quiet! Dark Rock 4.

Performance value adjusts a bit with the MasterAir MA620P and ends up at just $1 under the group average with a retail price of $55.

FLIR One Pro thermal imaging of the Cooler Master MasterAir MA620P provides some interesting data, especially when comparing 100% and 50% fan speeds. At 50% fan speed, a marked difference in thermal load is easily seen at the center of the cooler and easily shows outlined contrast over the section covered by the thinner, top plastic fascia. Conversely, the ejected mass of heated air shows brightly behind the rear of the MA620P in the full fan speed image.

By producing better thermal performance and providing arguably better design, the Cooler Master MasterAir MA620P is a welcome upgrade to its predecessor while also ringing in a bit cheaper than the previous model. However, as the CPU cooler aftermarket is quite heavy with dozens of vendors and models from which to choose, it is absolutely paramount that either appearance or performance offer the most value they possibly can for the consumer. Cooler Master has opted to lean more towards visual appeal, while conceding a bit on outright top cooling potential.

Other coolers in the comparison group can produce better cooling results, but arguably none have the aggressive design AND the lighting display capability the Cooler Master MasterAir MA620P carries.

The MasterAir is undoubtedly a strikingly handsome cooler with excellent RGB lighting capability. While it does struggle under extremely high thermal loads, it would do very nicely for a modestly overclocked quad core CPU and a sci-fi gaming rig theme.

Prev Page Features and Specifications
2 Comments Comment from the forums