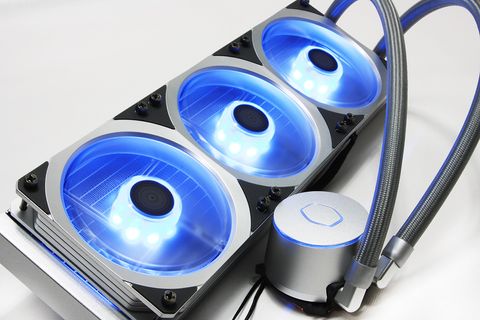 We evaluate the performance of the Cooler Master ML360P Silver Edition against similar coolers available on the market using tests we’ve conducted from multiple products. We’ve chosen the NZXT Kraken X72 and Cooler Master Master Liquid ML360R RGB to round out the 360mm AIO grouping while including the Corsair H115i RGB Platinum as a 280mm AIO for comparison as well. All tests are run on our trusty Intel Core i7-5930k and clocked to 4.20 Ghz at 1.20v.

Interestingly enough, the steps in the measured fan speeds closely mimic the thermal load performance graphs, indicating that the coolers in the comparison perform so similarly for their reported fan speed that we could likely begin to scale performance of each cooler equally based on these values. Higher fan speeds often indicate higher rated airflow and static pressure through the paired radiator, which results in lower thermal load scores.

Evaluating thermal performance and relative noise levels, the Cooler Master ML360P Silver Edition is the only cooler that manages to post a positive range for both 50% and 100% of our evaluation group, while the others see sharp contrasts between full- and half-speed fan settings, in relation.

Thermal load imaging from our FLIR One PRO shows an indication of heat soak at 50% fan speeds across the length of the radiator, as well as along the coolant tubing between the pump housing and radiator. Since we observed some impressively low noise levels even while fans were running at 100% PWM, an intelligent fan curve would likely benefit users of the Cooler Master Master Liquid ML360P Silver Edition quite well, assuming you have the patience to adjust that curve to meet your needs.

Cooler Master impressed us with the overall presentation on the ML360P Silver Edition, providing some color in a marketplace filled with the same matte black AIOs we often find drenched in the glow of excessive RGB abuse. Paint finish, trim accents and selectively-placed lighting are well balanced to provide a tasteful approach on the aRGB liquid cooler design that frankly offers a certain distinction and premium appeal while unfortunately also brandishing a price tag that confirms the same.

Perhaps real-world pricing will settle a little lower once the cooler has been on the market for a few months. But even at its current pricing, this cooler will find appeal among builders who value simplicity and style over the lowest possible price. If you’re looking for a powerful, quiet cooler that’s easy to install and saves you some cable-routing frustration, look no further. Just know that you’ll have to pay extra for that privilege, and should one of the three fans start to get noisy or stop working altogether, you’ll either need to somehow secure a replacement from Cooler Master, or install three new fans to take the place of the monolithic three-spinner housing the company includes in the box.