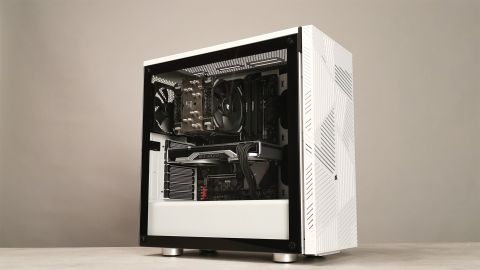 With impressive performance and a good internal layout, plus a low price, the only thing that lets the Cardbide 275R Airflow down is its dated cable management.

When it first launched in 2018, Corsair’s Carbide 275R was an impressive chassis. With a low price point, the company managed to compliment a good internal layout with classic styling to produce a case that was sleek and easy to work with. Its main drawback that kept it from being one of the best PC cases was the solid front panel restricting intake air.

As the name suggests, Corsair’s 275R Airflow looks to address that complaint while also reducing the overall retail price in some locations.

Corsair’s 275R Airflow chassis certainly looks striking, with its latticed front air vents. It’s available in both black and white, with a glass side panel . The front panel is an ABS plastic, with a sand-blast style finish, and the rest of the frame is a soft powder-coated steel.

For front I/O, you have access to a power button, a reset switch, two USB 3.1 ports, and a 4-pole microphone/headphone combo jack. There’s no integrated lighting or RGB in any capacity. But for the $80 asking price, that’s not necessarily a big drawback.

The front panel on the Corsair 275R is securely attached. Removing it requires you to pinch one or two of the pins that secure the panel in place from inside the chassis, while pulling from the bottom. Once it’s detached, there’s no integrated LED lighting or cables to worry about, so you can simply place it to one side.

Underneath, you’ll find a removable magnetic dust filter -- with a very fine mesh to allow easy cleaning -- and access to the two included intake fans. The Corsair 275R Airflow also supports up to a 360mm AIO liquid-cooler.

To remove the glass side panel, simply take off the thumb screws from each corner, and lift the panel off. The rear panel has two retainable thumb screws situated at the back of the case. The interior of the Corsair 275R Airflow, although spartan in appearance, actually comes together quite nicely. There’s a soft-touch paint finish throughout, plenty of rubber grommets, and cable passthrough holes located in key positions, for things such as the HD audio front panel header, the PCIe power, and more. On top of that, Corsair’s also included support for vertically mounted GPUs as well, although you will have to buy that adapter separately (which sells for $60, direct from Corsair).

Similar to the be quiet! Pure Base 500 we reviewed earlier this year, Corsair’s also integrated mounting locations for two 2.5-inch SSDs in the front of the case. However, unlike the Pure Base, it’s baked into the motherboard tray itself as opposed to a removable bar.

There’s also ample room for a standard-thickness 360mm AIO liquid-cooler in the front of the chassis, although you may have to remove the HDD cage to fit it. The roof additionally supports up to a 240mm AIO, with offset mounting locations to reduce motherboard conflicts. If you do decide to go that route, we recommend you install your CPU/EPS power cables before installation of the AIO. That said, you’d be far better off mounting the AIO in the front, and running exhaust fans in the roof instead.

Moving to the back of the motherboard tray, we see the Corsair 275R Airflow follows a traditional style when it comes to cable management. There’s zip-tie points here, rubber cable grommets and that’s it -- there are no velcro straps or cable channels. What you do get is an additional two 2.5-inch SSD mounting trays and access to that 3.5-inch hard drive caddy.

You can remove that fairly easily via Phillips-head screws located underneath the case securing it down, and one securing it to the motherboard tray. Once they’re removed, simply slide it along to the rear of the chassis and pull it out. This is actually how we ended up installing our test build, as it gives us easier cable-routing options.

Our ATX “build” test bench consists of the following:

For improved compatibility -- and as we move away from traditional 3.5-inch drives -- we’d like to have seen a half-height hard drive caddy that supports a single 3.5-inch drive in the bottom, that you can slide in and out of the case easily. That would eliminate the clearance issues and also provide ample room to tuck those excess cables out of the way as well.

When it comes to installing your power supply, we always recommend -- for modular ones -- you pre-install the cables first. Unfortunately, our Corsair HX750 PSU is too large to fit in with the cables preinstalled and the hard drive caddy in its factory position.

To get around this, we had to remove the HDD caddy from the case and install the PSU first, however if you do that there’s no way to reinstall the caddy afterwards. If you bend the cables back towards the rear of the case, you should theoretically be able to install both without a problem as long as you plug in the cables after the power supply is secure, but that will be more frustrating.

Installing our final components, the SSD and the GPU, didn’t present any problems. After that it was just a case of cable management, using a few loose cable ties here and there, and we were done.