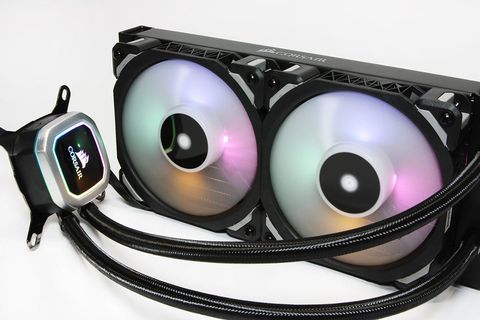 Using data from previous cooler evaluations, we are able to compare the performance of the Corsair H110i RGB Platinum to other coolers in its market segment. We're comparing data against the newly released Corsair H115i RGB Platinum (280 AIO), the Cooler Master MasterLiquid ML240R RGB (240 AIO) and the Corsair H100i Pro (240 AIO).

Fan speeds aren’t directly to blame, as above we see close speeds between first and last place. Interestingly, pump speeds on the group-leading H100i Pro were a bit lower than that of the last-place H100i and third-place H115i RGB Platinum, although all three are Corsair products.

High fan speeds often result in higher registered noise levels, which leaves us with no real surprises in the above graph. The two H100i coolers have the speediest fans, which gave them the highest decibel readings. However, the pair of larger, 140mm fans on the H115i RGB Platinum also appear to want their voices heard.

Higher noise levels led the pair of H100i coolers to take a hit in terms of cooling versus noise efficiency. Meanwhile, the H115i and MasterLiquid ML240R RGB benefitted from having very similar thermal load and decibel reading results.

Thermal imaging from our FLIR ONE Pro camera shows slightly raised heat soak in the cooler tubing and radiator at 50 percent fan speeds. The additional volume of moving air makes a large impact on the overall thermal loads being carried by the coolant.

This leaves us scratching our heads as to why someone would consider paying a 30 percent premium for not-quite-as-good thermal performance and RGB lighting that can be had for less money…from Corsair themselves.

However, you can still have your cake and eat it too if you are looking at a Corsair 240 AIO cooler: it just happens to be the H100i Pro and not the H100i RGB Platinum.

Prev Page Features and Cooler Specifications
Be In the Know