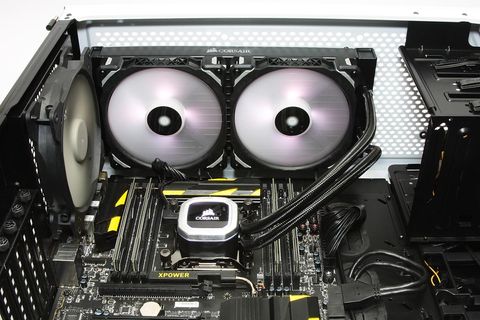 The larger 280 coolers use pairs of 140mm fans that typically spin slower than the 120mm fans used on 240 radiators. It is interesting to note the difference in pump speeds between the two Corsair units as both coolers are each relatively new in the company's arsenal.

While faster fan speeds often result in higher registered noise levels, it’s rather intriguing to see the larger 140mm fans producing higher decibel values. But the 1800 RPM fans are fast, even by 120mm fan standards. Those big blades disrupt a lot of air to force it through that big radiator.

High noise levels and relatively moderate cooling capacity lead to a split result in the Corsair H115i RGB Platinum's relative noise and thermal performance. On the one hand, cooling performance is decent with the fans running at full speed, but the fans are rather shouty. Conversely, when the noise level is whisper quiet at 50% fan speeds, thermal performance begins to suffer. By comparison, the Corsair H100i Pro performs really well at both RPM settings but suffers the most at the hands of the decibel meter. Meanwhile, the Cooler Master MasterLiquid ML240R RGB sees the opposite end of the spectrum.

The Corsair H115i RGB Platinum sells for $170 (£130) which is the same as the Deep Cool Gamer Storm Castle 280 RGB. Both the Corsair H100i Pro and the Cooler Master MasterLiquid ML240R RGB are less than $120 (£92), which is why our chart ultimately leans towards the smaller performance-bound 240 AIO coolers.

The thermal images from our FLIR ONE Pro camera show some slight differences between the fan settings, with full fan speed offering the best performance. With the fans at 50%, we can see heat soak from undissipated thermal load still lurking in the coolant. Ultimately the slower fan speed equates to less airflow and reduced heat dissipation.

Strangely enough, the H155i's biggest competitor is one of the smallest in our testing group: The 240mm H100i Pro. We're not sure why someone might favor the larger, and therefore more difficult to fit into the chassis, 280 H115i RGB Platinum. It comes at premium pricing but doesn’t cool as well as the less-expensive H100i Pro.

Of course, the RGB fans on the H115i RGB Platinum are the big differentiator, as the H100i Pro fans are devoid of RGB bling. Both coolers do sport a Corsair-themed RGB backlit CPU fascia that's controlled by the company's iCUE software. The big question is whether the $50 (£38) premium is worth sacrificing a few degrees in cooling potential in exchange for the option to bathe your fans in 16.7+ million different colors.

Prev Page Features and Specifications
Be In the Know