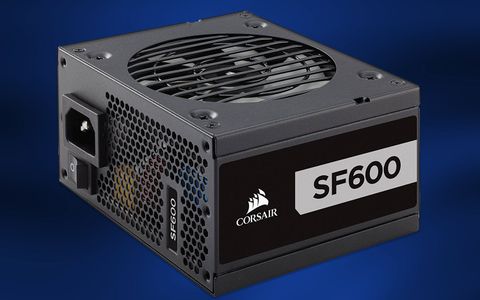 This is the best SFX-based PSU that money can buy. Although we are anxiously waiting for Corsair's higher-capacity SF750 to land in our lab, enthusiasts who don't need that much power will be extremely happy with the company's improved SF600 Platinum. Or, if you want to save some money, check out the older SF600 Gold, which remains in production and is still a great power supply.

Corsair’s SF600 Platinum sets new standards for performance and efficiency in the SFX segment. The cherry on top is this PSU’s ultra-quiet operation, especially under tough conditions with high loads on the minor rails. That's is an improvement over the SF600 Gold, which forces its fan to spin at high speeds in the same usage scenario.

Taking something that’s already good and making it better is tough to do, but Corsair and Great Wall collaborated to build an even better small form factor PSU. Their SF600 Platinum is the current performance king among SFX power supplies. It comes equipped with individually sleeved cables and an SFX-to-ATX adapter. However, the SF600 Platinum also costs more than its predecessor, the SF600 Gold. You’ll have to factor in a hefty premium when it comes time to determine if higher performance and improved efficiency are worthwhile.

The SFX and SFX-L categories are becoming more popular targets for PSU manufacturers. SilverStone was the first company to really innovate in this segment, and it still offers the most options with 12 SFX and SFX-L products in its portfolio. Corsair does sell fewer SFX-compatible power supplies, but it impressed us early on with the SF450/600 models. Now, with the introduction of its 80 PLUS Platinum-rated designs, our expectations are set high.

Right out of the gate, though, we’re a little disappointed in the 600W model’s cable configuration, which remains unchanged from the SF600 Gold. In fact, the 450W and 600W versions share the same number and type of cables. We find this odd, since the SF600 Platinum should be capable of supporting more devices.

At least until the SF750 hits our lab, Corsair's SF600 Platinum is the highest-capacity model we have to test. Rather than affixing a v2 on this second-gen power supply, the company stuck to its 80 PLUS efficiency certification for identification purposes. The older SF600 Gold will remain in production as a more affordable alternative for folks who want a capable SFX-based PSU but don't necessary need to pay extra for increased efficiency.

One of the biggest differences between the SF600 Gold and this latest model is that the Platinum version has a much better LAMBDA noise rating. Corsair, with Great Wall’s help, improved the fan controller's response to high loads on the minor rails. That wasn’t the case previously; the older model’s fan went crazy when the 5V and 3.3V rails were hit with those same load scenarios.

All of the protection features we’d expect from a high-end PSU are accounted for. The power supply is your PC’s heart. As such, it’s responsible for protecting itself and all of the hardware behind it from brownouts and other abnormal situations.

Cooling is handled by a 92mm fan (the same one used in all of Corsair’s SF models). Thanks to the rifle bearing inside, it should last a long time. That’s why Corsair has no problem covering the SF600 with a seven-year warranty. Nonetheless, some enthusiasts expect FDB fans in expensive PSUs. Just remember that many high-end power supplies claiming to use FDB fans actually employ rifle bearing ones. At least Corsair is honest. On top of that, this fan has proven itself to be reliable in a number of other products. If it works well, why change it?

The combined load on the minor rails is high at 120W, while the single +12V rail can deliver up to 50A. On paper, the 5VSB rail offers up to 12.5W, though it gets as high as 17.5W in the real world before OCP intervenes.

All of the cables, aside from the ones hosting PCIe connectors, are short. That’s not surprising, since this PSU is designed for small form factor cases. It is strange, however, to see 700mm PCIe cables when the single EPS cable is only 400mm long.

Next Page Unboxing Video
7 Comments Comment from the forums