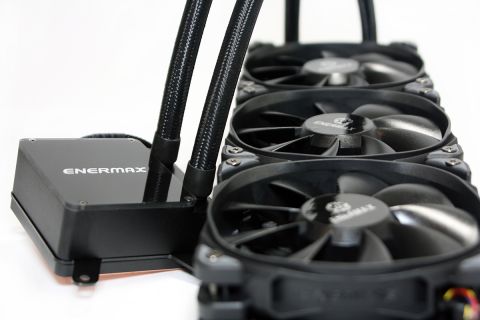 Here at Tom’s Hardware, we always like to compare hardware using our standard testing platform to provide results for each cooler based on identical testing conditions. Since this is our first Threadripper-specific cooler testing, we are comparing it against our in-house, full liquid-cooling loop composed of a Swiftech MCP50x pump, a Swiftech Apogee SKF Heirloom TR4 CPU block, a Swiftech MCP35x/MCP50x reservoir, Bitspower compression fittings, an XSPC EX360 radiator, and three Scythe Ultra Kaze 3000 RPM fans. Our AMD Ryzen Threadripper 1900X processor is clocked at 4.1GHz at 1.40V on an MSI X399 Gaming Pro Carbon/AC motherboard.

Going head to head with a full custom liquid-cooling loop is no easy competition for any cooler. However, our chart shows the Enermax Liqtech 360 TR4 OC turning in impressive load testing numbers just a few degrees Celsius over our custom benchmark cooling loop. Even our motherboard voltage regulators and power phase system probes return temperatures reporting effective cooling, indicating that the Liqtech 360 is providing excellent airflow benefit for adjacent components.

All fans will run at slower rotational speeds when being tasked to force large volumes of air through restrictive radiator fins, and the Enermax Twister Bearing Pressure fans are no different. They registered an average of 2160 RPM at full speed and 1080 RPM at 50% in our lab test scenarios, while the Liqtech pump remained at maximum speed, 3040 RPM, for the duration of all testing.

With three cooling fans spinning faster than 2100 RPM, we were surprised at the relatively low registered noise levels produced by the Enermax Liqtech 360. At 50%, the entire cooler is almost inaudible, even with the pump operating at 100% of its flow and pressure rate. (The cooling fans of the reference liquid-cooling loop are the notoriously loud Scythe Ultra Kaze 3000. While they move a lot of air, they also disturb the surrounding air much more in doing so.)

With load temperatures and noise held well in check, it should come as no surprise that the Acoustic Efficiency chart looks as favorable as it does. Granted, neither cooling solution posted a positive reading at its maximum fan speeds, but know that the graph bases all results against both full-speed and half-speed overall averages, including averages of both coolers at 50% fan RPM. With both cooling solutions turning in very quiet half-fan-speed readings, the Liqtech 360 TR4 OC was only 4 decibels off of the overall median value, showing the narrow acoustic margin at work here.

If you’re like us, this chart above is the one you have been anxious to see. With recent reductions in price, the Enermax Liqtech 360 TR4 OC was selling for around $135 at this writing, down from an original cost of $150. By comparison, the cost of our full liquid-cooling loop tallies up to $404. This means that for about a third of the cost of our reference liquid-cooling loop, you can maintain an overclocked eight-core AMD Threadripper 1900X using the Liqtech 360, and do so within 4 degrees Celsius.

In the Liqtech 360 TR4 OC, Enermax has graced the Threadripper world with a cooler that covers these large enthusiast processors in full, providing performance similar to custom liquid cooling with the easy installation and moderate cost of an AIO cooler. Enermax also keeps costs down by avoiding RGB lighting and the relevant software integrations. The lack of lighting might turn away some buyers who prefer millions of colors and a software UI. However, Threadripper fans seeking excellent cooling performance, and who wish to set up some simple fan-cooling curves, will find just that in the Liqtech 360 TR4 OC.