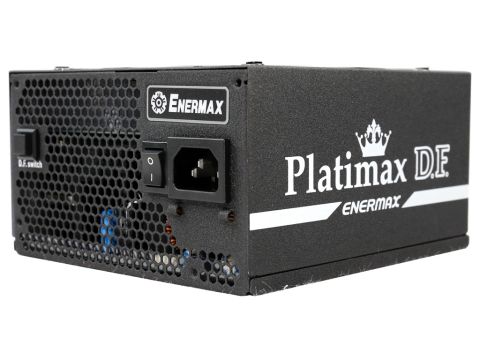 The highest efficiency region is between 210W and 510W at +12V, with load on the minor rails staying low. After all, modern PCs don't draw much power from the 5V and 3.3V rails.

We applied half-load for 10 minutes with the PSU's top cover and fan removed before taking photos with our modified FLIR E4 camera that delivers 320x240 IR resolution (76,800 pixels).

Temperatures inside the PSU are elevated, since only the bridge rectifiers and APFC converter use heat sinks. The rest of the components, including all FETs, are mostly cooled by bus bars and the boards onto which they are installed.

We also notice high temperatures from the solid and polymer caps surrounding the +12V board. What worries us most are the heated-up electrolytic caps, since those are the ones prone to failure under tough conditions.