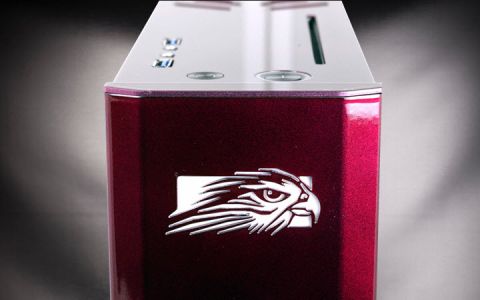 We tested the Tiki against the recently reviewed Corsair One Elite, which sports a similar form factor (extremely small) and full-sized desktop components. With its overclocked Core i7-8700K and GeForce GTX 1080 Ti graphics card, it should give you an indication of how much more performance your money would get if you went with a Titan Xp and the faster-clocked anniversary edition Core i7-8080K processor.

We also included the data from our Z270 test bench, loaded with an Intel Core i7-7700K processor, 16GB of Kingston HyperX Fury DDR4-2133, and a single EVGA GeForce GTX 1080 Ti Black Edition graphics card to see how a single GTX 1080 Ti and older CPU compares against the newer counterparts and the mighty Titan Xp.

The Tiki starts our test suite with a strong lead against the Corsair One Elite and our reference system in the synthetic 3DMark Fire Strike and Time Spy benchmarks. The Tiki’s higher-clocked CPU and full-board Pascal-based Titan Xp easily outperforms the GTX 1080 Ti-equipped competition, albeit by a small margin.

The CPU focused synthetic tests of Cinebench R15 gives the Tiki’s overclocked Core i7-8086K another opportunity to shine. With a single-core clockrate of 5.3GHz, the Tiki outperforms the Corsair One’s i7-8700K, which is set to its default clockrates and Turbo binning (4.7GHz on one core). The Tiki continues this trend in the multi-threaded tests, with all six CPU cores (and 12 threads) hitting 4.8GHz and netting 188.84 points more than its competition.

The Tiki is handed its first loss in the Video Processing portion of the synthetic CompuBench tests, falling behind even our test system. However, the Corsair One Elite also falls behind our test rig in that particular portion of the test and only leads the Tiki by less than 1 FPS. The bitcoin mining test favors the Titan Xp inside the Tiki over the GTX 1080 Ti-equipped contenders, but not by a considerable amount.

Although we tested the drive at queue depth 2 (QD2 - what we consider to be indicative of an average user’s workloads and tasks), these numbers aren’t in line with Intel’s rated performance (the company rates random read and write performance over 500,000 IOPS) However, applications that use all of the available threads (higher queue depths) to perform storage tasks will certainly get their money’s worth from the over $2,200 component,and will likely hit that advertised performance threshold. However, we wouldn’t recommend configuring a system with this drive unless you absolutely need that level of random storage performance, but even then, the ridiculously high price tag is hard to justify.

The Tiki’s 32GB (2 x 16GB) kit of G.Skill Ripjaws V DDR4-3000 has noticeably higher total memory bandwidth than the One Elite’s kit of Corsair Vengeance LP DDR4-2666, which shouldn’t be a surprise given the higher frequency. Most gamers will find a less expensive 16GB kit of memory to be just as potent for their primary workloads..

The Falcon Northwest Tiki review sample in our lab easily bested the other PCs in the field with its overclocked CPU and top-end (the very top) Nvidia graphics card.

The company’s Exotix paintwork starts at $375 for a single color. Special paint mixes called Rain, Flames and Clouds (included on our review sample) will add $688, $750 and $938 to the total, respectively.

Falcon Northwest doesn’t charge for the RGB LED strip or the overclocking. The company stated that although they are happy to overclock the CPU and GPU for their customers upon request, it can add a few days to the build process due to the additional stability testing required before shipping.

The Falcon Northwest Tiki is still as awe-inspiring as before, and its small footprint and powerful components make it desirable even for seasoned PC builders. You’d be hard pressed to find a DIY chassis that small that can accommodate everything inside the Tiki, and you’d be even harder pressed to find one with custom paint options quite like this.

We can’t blame the company for equipping our review sample of the Tiki with the absolute best components possible (at least, for the time being, until RTX cards come out) - it easily bested the comparable competition (in size and performance tier) with its Core i7-8086K, Titan Xp graphics card, and 1.5TB Intel Optane 905P SSD (which in itself, adds over $2,200 to the bill). The Tiki’s total price tag looks a lot better without these particular components in it, and Falcon Northwest’s “all or nothing” approach to this configuration is both an advantage (performance) and a detriment (price), and we wouldn’t recommend this particular setup to a gamer.

The CPU overclocking is also available sans service charge - something we’ve haven’t seen from another custom shop PC builder to date. Most companies will charge anywhere from $50 to $100 per component, but Falcon Northwest will overclock your processor (and GPU, upon request) for free so long as you don’t mind waiting a few more days so it can be properly stress tested for stability.

Although the $6,308 configuration of the Tiki in our lab is an out-of-reach purchase for most gamers, it’s a shining example of Falcon Northwest’s PC building acumen, which ranks as high as the benchmark results in our book. We can’t think of too many PC builders that dive into the custom-designed chassis waters, and the Tiki can swim with the other sharks in that ocean with its intelligent design, small footprint, and impressive paintwork. It may not be in everyone’s budget, but the Falcon Northwest Tiki is an incredible custom gaming PC anyone would be proud to own, if they can afford it.