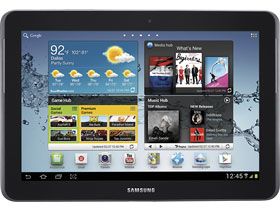 Today's tablets aren't the clunky first-generation rectangles they were two years ago. They're sexier, sometimes slimmer, and almost universally more powerful. Potent graphics hardware is being used to drive higher resolutions and better display performance as vendors scramble to figure out what'll get curious consumers to open their wallets amidst difficult economic circumstances  .

Apple raised the bar with its third-generation iPad, implementing a 2048x1536 LED-backlit display. But it wasn't the first company to push higher-quality tablet screens. That honor goes to Samsung and its Galaxy Tab 10.1, which we reviewed in Samsung Galaxy Tab 10.1: A Second-Gen Android Tablet. Before "the next iPad" launched, the Tab 10.1's screen was our hands-down favorite.

The Galaxy Tab 2 10.1 is physically similar to its predecessor, retaining the predominantly matte silver theme shared with Samsung's other tablets. However, the Galaxy Tab 2 10.1 is noticeably thicker than the Tab that came before. Clearly, not all tablet companies are feeling pressure to slim down their designs as they evolve.

A thicker iPad disappointed us a little when Apple launched its newest iteration, and we're feeling the same thing about Samsung's Galaxy Tab 2 10.1. The difference is that the third-gen iPad is actually heavier than its predecessor, while the Galaxy Tab 2 10.1 weighs exactly the same as the Galaxy Tab 10.1, making a slightly bulkier chassis somewhat easier to accept.

The Galaxy Tab 2 carries over most features, with a few exceptions. Samsung includes the same 3.0 MP rear-facing and 2.0 MP front-facing cameras. However, the LED-based flash is gone, making low-light photography nearly impossible. On the other hand, the Galaxy Tab 2 10.1 now features an infrared blaster, in addition to a much-requested microSD slot that alleviates the constraints of limited internal storage space.

The Galaxy Tab 2 10.1 appears to be built to the same durability standards as its predecessor. Samsung still employs a plastic shell, which is now painted silver instead of the two-tone metallic grey-and-white scheme used before.