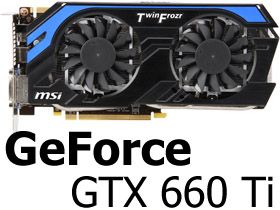 More than four months have passed since Nvidia's Kepler architecture was introduced in GeForce GTX 680 (check out GeForce GTX 680 2 GB Review: Kepler Sends Tahiti On Vacation for more information on the design itself). In the five months since, we've seen Nvidia fill up the high-end space with its GeForce GTX 670 and GeForce GTX 690. However, GeForce GT 640 remains the only mainstream board with Kepler's DNA in it. That leaves an almost-$300 range currently filled with older Fermi-based models, such as GeForce GTX 560, 570, and 580. No doubt, newer and more efficient Kepler-derived silicon will take the place of those cards, bringing us today's GeForce GTX 660 Ti launch.

It's common to see the same piece of silicon nipped and tucked to create products aimed at different price points. Companies like AMD and Nvidia play with clock rates, alter memory interfaces, and turn pieces of their GPUs on or off. The GeForce GTX 660 Ti employs the same GK104 processor as GeForce GTX 670. However, Nvidia cuts the card's memory bus down from 256- to 192-bits and removes one of the GPU's four render back-end clusters, leaving everything else intact.

We might have expected Nvidia to detune more of its GK104. However, GeForce GTX 660 Ti employs the same core and memory clocks as GeForce GTX 670. That is to say, like the 670, this new board features seven functional SMX blocks. Consequently, GeForce GTX 660 Ti comes equipped with 1344 CUDA cores and 112 texture units. Each of its three remaining ROP clusters output up to eight 32-bit pixels, totaling 24 pixels per clock. Moreover, three 64-bit memory interfaces aggregate to 192 bits. We expect to see GeForce GTX 660 Ti perform on-par with GTX 670 in compute-oriented apps, but not as well in games.

Beyond its general specifications, GeForce GTX 660 Ti offers the same GPU Boost functionality found on the GTX 670 and 680 cards, support for up to four displays, and TXAA in games that support the feature. Although those two higher-end boards support four-way SLI configurations, Nvidia cuts GeForce GTX 660 Ti back to a maximum of three cards, which is actually something we haven't seen from the company before. Typically, at this price point, we'd expect a two-card maximum.

Nvidia says GeForce GTX 660 Ti will sell for around $300, putting it up against AMD's Radeon HD 7870. The GTX 660 Ti might suffer a narrower memory interface, but its fast 1502 MHz memory plays an important role in maintaining competitive levels of bandwidth. Pixel fillrate is lower on the new GeForce card, though.

According to Nvidia, it expects the GTX 660 Ti to beat AMD's Radoen HD 7870, and even compete against Radeon HD 7950 (even though the Tahiti GPU-based Radeon wields notably more memory bandwidth).

In an attempt to sweeten the launch, Nvidia's partners should be bundling a coupon for Borderlands 2 with GeForce GTX 660 Ti cards. That's a $60 value, according to the pre-order pricing.

MSI’s interpretation of the GeForce GTX 660 Ti is a little more expensive than what Nvidia told us to expect. It sells for $310 instead of $300. The extra $10 pays for a faster 1019 MHz base clock (typically able to boost to 1097 MHz), an aftermarket Twin Frozr IV cooler, what MSI markets as its military-class components, and control over three voltage levels (GPU, memory, and VDDCI).

As expected, we see the same output options as Nvidia's reference GeForce GTX 670: two dual-link DVI connectors (one DVI-I and one DVI-D), a single HDMI port, and one DisplayPort output. The card can handle up to four screens in desktop mode, three in Surround mode, and a 3x1 + 1 combination (three monitors in Surround mode and the fourth in desktop mode). And, unlike most of AMD's Radeon cards, utilizing DisplayPort isn't a requirement for gaming across three panels.

The card’s PCB measures 9.5” x 4.5”, which is the same as Nvidia's reference specification and identical to the similarly-priced Radeon HD 7870. Two six-pin auxiliary power connectors combine to deliver the 190 W specified by MSI. That's 40 W higher than Nvidia's specification, and likely a result of more aggressive factory overclocking. Nvidia points out that, if you forget to attach those power leads, the card will boot to a warning screen.

MSI’s Twin Frozr IV cooler consists of a four-heat pipe system with two 80 mm fans. Company representatives claim that its design discourages dust build-up, though we can't speak to that specifically, given limited testing time. We can, however, confirm that the card is quiet and cool-running, which we'll quantify in our thermal and acoustic testing.