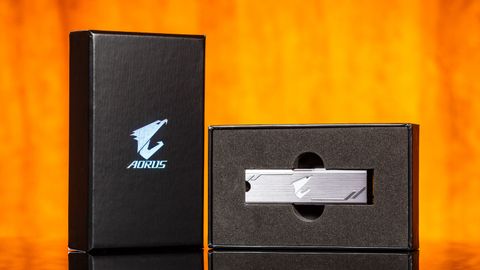 Gigabyte's first RGB SSD was a bit disappointing for us, but there are always challenges on the path to success. After hitting the drawing boards, Gigabyte came back with a winner. The new AORUS RGB M.2 NVMe SSD is the first RGB M.2 SSD we’ve tested, and we think it is a terrific buy.

While twice as expensive as comparable SATA SSDs, the Aorus RGB actually undercuts the Samsung 970 EVO Plus and WD Black SN750 by $10 at the 512GB capacity while offering comparable performance in most cases.

The Aorus drive dished out nearly 3.5/2.1 GB/s of throughput in our testing and was very competitive in our more real-world PCMark 8 and SYSmark test suites. Because the drive has no additional over-provisioning like the MyDigitalSSD BPX Pro, however, it has a smaller SLC cache which leads to slightly slower results and less efficiency in our 50GB transfer test. But, overall, the drive is still fairly similar to the BPX Pro.

This drive's solid blend of performance and endurance won't let you down if you plan on using it for productivity applications. Considering an average desktop user writes roughly 10-20GB a day to their OS drive, or roughly 36TB total during the five-year warranty period, you would be hard-pressed to reach the 800TBW endurance rating. You could up that to a whopping 400GB of writes a day and still be within warranty, making this drive quite useful as a scratch disk or media cache for editing.

Of course, it's best if you can not only add performance to your build but also add in some extra style. Aesthetically, the Aorus RGB is RGB done tastefully. It complements any Aorus motherboard in a seamless integration of design and lighting. Speaking of which, while the RGB lighting adds slightly to power consumption, its overall impact is minuscule. There isn't any extra heat to worry about, especially with the beefy heatsink.

We’re also glad to see Gigabyte provide an SSD Toolbox to monitor the device, and Fusion RGB 2.0 software integration is a plus. We just wish you could modify the lighting in a hardware-agnostic way. For now, the feature only works on certain Gigabyte motherboards. This limited compatibility is a real bummer for those looking to add one of these drives to their build if they have motherboards from competitors like Asus or ASRock.

Prev Page 512GB Performance Results
Be In the Know