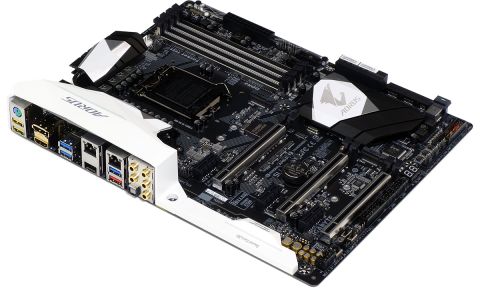 For the three competing motherboards, we disabled so-called Enhanced modes (fixed frequency) for Intel Turbo Boost. The Aorus Z270-Gaming 7 firmware we used didn’t even offer Intel-standard Turbo Boost, so I manually configured the board to the correct 45x-44x-44x-44x ratios from within its Advanced CPU Core Settings firmware submenu prior to running traditional benchmarks.

With all three motherboards set to Intel’s Core i7-7700K specifications, the Aorus Z270X-Gaming 7 performs identically to the MSI Z270 Gaming M5 and Z170A Gaming Pro Carbon. We’ve previously seen a trend showing that features and overclocking are the best reasons to buy a Z270 over its Z170 counterpart, but what will other benchmarks show?

I really don’t know why the Z170 motherboard performed so well in Ashes, but soon I won’t need to know as it will be pushed off the chart in the next review. I do know why both MSI boards fell behind in Talos though: The game lags when the Nahimic and Nahimic 2 software included with MSI’s samples is running, and you can see a chart to show how these perform with Nahimic disabled here.

The Aorus Z270X-Gaming 7 is fairly well matched in most timed applications, except that Adobe After Effects keeps getting longer. With no clear pattern to indicate that this is anything more than a minor application glitch, I’m ready to move on to the bigger picture.

The strange power and heat numbers initially revealed in a different Gigabyte motherboard have now been exposed as a fixed-voltage, fixed-frequency setting that only occurred on the older motherboard after updating its firmware to support this processor.

Further testing revealed that while setting the CPU vCore to “Normal” rather than “Auto” mode still left the 1.30V core setting locked, setting the “Dynamic vCore” level to anything other than default re-enabled the CPU’s normal voltage behavior. Anyone who knows firmware well enough to do this will be rewarded with an energy and heat drop commensurate to the stock core voltage, plus or minus their custom setting. Oddly, pressing the ECO button then returned the oddball fixed-voltage behavior, along with the above power and thermal penalties.

The Aorus Z270X-Gaming 7 easily reached the same 48x 100MHz CPU x BCLK setting of the other boards, and the Z270 Gaming M5’s apparent lead is misleadingly caused by an inaccurate BCLK. Moreover, the Aorus Z270X-Gaming 7 is the best DRAM overclocking motherboard we’ve yet seen, and it may still become the reference standard for DRAM overclocking comparisons. We’ll need to test a few more boards before making a final decision regarding our selection of reference hardware, so stay tuned!

DRAM overclocking wouldn’t even matter if not for the bandwidth advantage, and we’ve seen motherboards with greater overclocks produce lower bandwidth primarily due to conservative secondary and tertiary timings that companies have used to achieve their higher stable overclocks. Such was the case with the Fatal1ty Z270 Gaming K6, which clocked higher but at lower bandwidth than the Z270 Gaming M5. The Aorus Z270X-Gaming 7 performs flawlessly while also having the best overclock.

Notice once again that four DIMMs have more bandwidth than two, even though two DIMMs can be overclocked to a higher data rate. This indicates the Kaby Lake memory controller’s preference for four banks of memory in a test of single-sided modules. Four banks is also a possible configuration for two double-sided DIMMs.

With an MSRP of $260, Aorus parent Gigabyte tells us to expect the Z270X-Gaming 7 to sell for $240 at your favorite online discount retailer. Or maybe that’s my favorite retailer. The question is whether it’s worth $50 more than the already-awarded Z270 Gaming M5 from competitor MSI.

Including the cost of implementation, the Aorus Z270X-Gaming 7’s onboard Thunderbolt 3 controller is worth around $25. Creative's sound controller is only slightly costlier than the high-end Realtek solution chosen by MSI, and Gigabyte added the expense of making all six of its PWM fan headers voltage-regulation capable. Most of its other features have similar value, right down to comparing the worth of its dual network controllers to MSI's onboard firmware-flashing ASIC. Extra control buttons and voltage detection points are nice but inexpensive additions, leaving the Aorus Z270X-Gaming 7 around $5 to $10 behind in value. Superior overclocking is its saving grace, and the best overclocker in our test series certainly deserves some kind of award.

Unfortunately, we can't give a wide-ranging recommendation for a board that still doesn’t give non-overclockers all of the CPU's integrated energy-saving features. While you can certainly enable most of those, getting around the stuck voltage issue requires fiddling around with the Dynamic vCore setting in firmware.

What this really means is that, until we see firmware fixes beyond the F4k revision of this review, the Aorus Z270X-Gaming 7 should only appeal to overclockers, underclockers, and other people experienced in firmware tweaks. That shouldn’t be a problem with most readers, but it will be a problem for some. But since we gave the Fatal1ty Z270 Gaming K6 a “for non-overclockers” stamp of approval, we can certainly flip the switch and give the Aorus Z270X-Gaming 7 a “for overclockers only” approval.

We look forward to Gigabyte’s additional firmware optimization in our next round of Z270 testing.