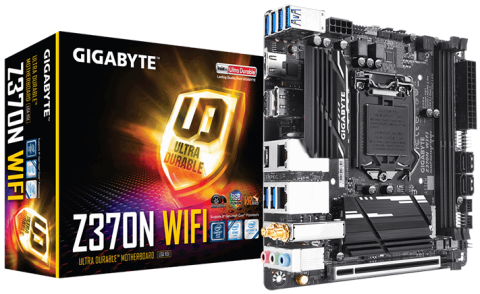 Gigabyte designed a fine board for an ordinary office or entertainment center PC in the Z370N WiFi. Unfortunately, a firmware quirk and undersized voltage regulator sink make it far less competitive in the enthusiast-oriented Z-series market.

If our X99 and X299 Mini-ITX motherboard reviews revealed anything, it’s that we, the enthusiast PC community, should have pushed manufacturers a little harder to develop motherboards for AMD’s proposed DTX form factor. Case makers were onboard, as the DTX proposal brought us the double-slot cube cases that could hold a Mini-ITX motherboard and double-slot graphics card. But DTX also extended board depth by 74mm, providing more space for DIMM slots and big voltage regulators without forcing cases to be either taller or wider. Yet the boards never came, and case makers repurposed the leftover space at the front of their cases for 3.5” drive bays. Because Micro-ATX is only semi-compact, Mini-ITX remains the only truly compact solution for performance enthusiasts.

Fewer CPU cores and memory channels have always made Intel’s mainstream platform a better fit for Mini-ITX’s diminutive 170mm depth, yet increased core count and onboard M.2 storage again cause us to question: Does Mini-ITX still provide enough component space for the compact builds of performance enthusiasts? Gigabyte sent its Z370N WiFi to help us find out.

The biggest losses created by the Mini-ITX form factor appear to be the compact 4+2 phase voltage regulator and rear-placed M.2. Although the latter is merely a loss of convenience, the former could potentially hamper its ability to overclock our mighty Core i7-8700K CPU.

The I/O panel also looks a little sparse, but many of the missing connectors have already fallen out of favor with most buyers. The world market is quickly abandoning digital optical cables in favor of HDMI audio, so maybe the extra connector isn’t needed? And hardly anyone configures a 7.1 speaker system using analog jacks, so maybe three of those is OK? Perhaps we don’t really need 7.1-channel surround gaming anymore?

On one hand we find that the Type-C port connects only at 5 Gb/s through the chipset’s USB 3.0 controller, on the other we find that one of the two HDMI ports uses a MegaChips MCDP2800 to boost its 4K output capability to 60Hz. We also find Intel controllers for the two Gigabit Ethernet connections and 867 Mb/s Wi-Fi. Combining this broad range of pros and cons within a mainstream $160 price, it appears that Gigabyte had all-hands-on-deck for this launch.

You probably wanted to see the rear M.2 connector, which supports both 60mm and 80mm card length. We also see a few power regulation components, the i219V Gigabit Ethernet PHY, and an ITE Super I/O controller. Perhaps Gigabyte could have added a PS/2 port to the I/O panel, just to satisfy those who prefer old keyboards.

The top-side M.2 slot includes a heat spreader, and supports 42mm in addition to 60mm and 80mm drives. Behind it rests headers for a Digital LED strip, FP-Audio, and S/PDIF-Out. In front of it are headers for front-panel USB 2.0 and 3.0, an RGB-LED strip, and CLR_CMOS jumper. The Z370 PCH surprisingly resides underneath the M.2 heat spreader and slot, which could make this the most important on-board M.2 heatsink we’ve seen.

Three 4-pin fan headers are positioned along the Z370N WiFi’s top edge, and the front-panel LED/switch connector is found next to a beep-code speaker header near the center of the front edge. Only four SATA headers are available, but that number meets or exceeds the number of drive bays available in many compact cases.

The Z370N WiFi installation kit includes a magnetic stand-up Wi-Fi antenna, an I/O shield, two SATA cables (one with a right-angled end), and a case badge. Buyers also get a full user manual, quick installation guide, and a driver/application disc.