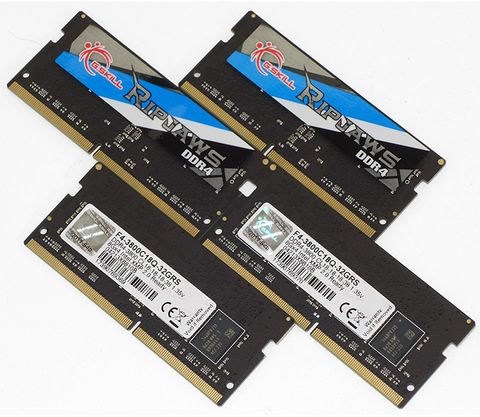 Builders who have the money for fast RAM and little faith in the overclocking capability of lesser modules will be pleased with the performance of G.Skill’s Ripjaws F4-3800C18Q-32GRS kit.

Enthusiasts are accustomed to exceeding expectations and blowing past common perceptions, and a few of the myths surrounding memory are among these. SODIMMs are assumed to be “notebook RAM,” but we’ve seen them in everything from compact desktops to servers. And just to flip things, we tested DDR3L long DIMMs two years before the Z170 platform launch brought that 1.35V limit to “regular” desktops. So let’s flip this again: Why can’t we have super-fast SODIMMs? When ASRock launched its X299E-ITX/ac in October, G.Skill was first to say “Yes you can!”

That we’ve had this kit for three months is no secret, as it was even used in the eventual review of that board, yet a pesky thought remained even as we moved on to other projects: Exactly how far could this RAM go? And what performance could be gained by using it?

The name “Ripjaws 4” may have had the desktop gurus expecting heat spreaders, but notebook guys know that when it comes to SODIMMs, such additions are usually just 3D-looking stickers. That’s because the modules are often spaced too closely to allow the extra thickness. G.Skill’s stickers take on a more minimal approach in that they simply appear to be exactly what they are.

We still get everything else we’d expect from a set of Ripjaws long-DIMMs in a smaller package, right down to the DDR4-3800 CAS 18 XMP profile. If your SODIMM-equipped system isn’t designed with XMP support, perhaps you should ask yourself what else it’s missing?

The baseline for this comparison will be a set of four Super Talent F24SA8GM DDR4-2400 SODIMMs. Each DDR4-2400 SODIMM is 8GB, and each uses JEDEC-standard CAS 17 timings. Even though Super Talent validates its SODIMMs four-at-once, buyers must still purchase four individual modules (at 4x the above DDR4-2400 price) to get the tested 32GB configuration.

With one 4x 8GB kit in one hand and four 8GB single modules in the other, both configurations are 32GB quad-channel, and both manufacturers provide a lifetime warranty.

We used our standard X299 motherboard testbed to evaluate today’s modules, adding the ASRock X299E-ITX/ac to make the comparison possible. Since ASRock’s current firmware uses “stability mode” settings when pushed past XMP settings, performance benchmarking at settings above DDR4-3800 required the use of ASRock’s A-Tuning utility for Windows.