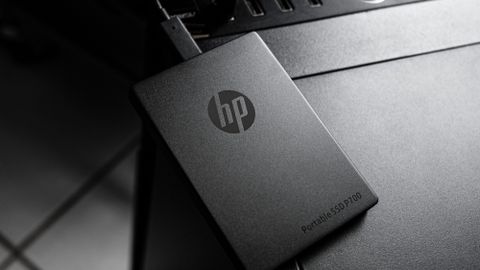 We put HP’s P700 up against a solid roster of 10 Gbps competition. SanDisk’s Extreme Pro, LaCie’s Rugged SSD, and Samsung’s T7 Touch cover the high-end and high-priced competitors while the Crucial X8, Adata SE800, and SanDisk Extreme make up the more affordable devices. Additionally, we threw in Samsung’s TB3 powered X5 and a LaCie Mobile Drive, a portable HDD, in for good measure.

When writing our multi-media and document files, the HP P700 kept up with some of the fastest devices and bested its lower-end competition. Transfers went quickly and reads were up there at some of the best rates in the group, too. Crucial’s X8 puts up a good fight here, proving its worth as a value-based contestant, but it has quite an Achilles' Heel that shows when writing a few hundred GB at once.

PCMark 10 is a trace-based benchmark that uses a wide-ranging set of real-world traces from popular applications and common tasks to measure the performance of storage devices. To test drives that store files rather than applications, we utilize the Data Drive Benchmark.

HP’s P700 ranks in fifth place in PCMark 10. With scores that essentially tie the SanDisk Extreme Pro, the HP P700 proves it is quite capable, but drives like the Crucial X8 and LaCie Rugged SSD are tuned a bit better for responsiveness in these workloads. Compared to a standard portable HDD, however, all of the flash devices are significantly more capable.

In ATTO, we tested the HP P700 at a QD of 1, representing most day-to-day file access at various block sizes. The portable SSD displays similar performance to the rest of the group, peaking at a bit over 1,000 MBps read/write or about double that of the SanDisk Extreme.

iometer is an advanced and highly-configurable storage benchmarking tool that vendors often use to measure the performance of their devices.

The HP P700 read and wrote at about 1 GBps in iometer. We also took a look at random performance and the HP P700 is quite impressive there. At QD1 it delivers some of the fastest responsiveness out of its competitors and, even when loaded with a bunch of random operations, it peaked at over 76,600 / 67,600 IOPS read and write. That's not something your ordinary HDD could even dream to do.

Temperatures were well within the rated operating range, even when reading and writing to the HP P700 at full speed for a few hundred gigabytes. We measured the write cache size at about 160GB. After writing at 1 GBps, speeds degraded to a respectable average of 605 MBps. The HP P700 outperforms the Samsung T7 Touch and Crucial X8 under heavier use. It will also usually outperform the Adata SE800 in daily use, but won’t keep up with the more intensive use cases that the SanDisk Extreme Pro, LaCie Rugged SSD, and Samsung X5 can.