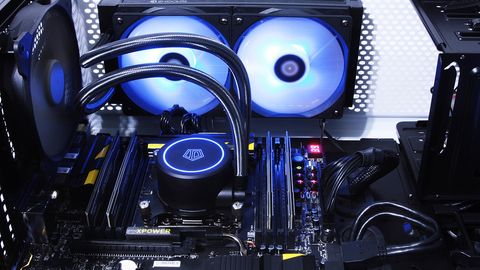 Maintaining the results from multiple standardized CPU cooler tests using our hex-core, Core i7-5930k (running at 4.2 GHz) allows us to make direct comparisons between the ID Cooling Auraflow X 240 and a few other 240mm AIOs; the Corsair H100i Pro, the Cooler Master MasterLiquid ML240R RGB and the ID Cooling Zoomflow 240.

CPU load temperatures using Prime95 show the Auraflow X 240 lagging somewhat behind comparison coolers, including its ID Cooling sibling, the Zoomflow 240. Motherboard power delivery temperatures, however, did show some promise by being better than its peers.

The ID Cooling Auraflow X 240 fans spin significantly slower than other coolers in the comparison group, which likely contributes directly to the warmer load temperatures seen in our temperature over ambient chart. However, while faster fan speeds might provide elevated cooling levels, these usually correspond to higher relative noise levels.

Interestingly enough, the Auraflow X 240's slower fan speeds do not reduce noise as much as one might hope when compared to other coolers: The 2000 RPM fans used by the ID Cooling Zoomflow 240 provide nearly identical decibel levels to the 1600 RPM fans on the Auraflow X 240. The reasoning behind ID Cooling's choice to use two different fan designs for its two coolers is also interesting.

When we compare thermal performance with relative noise levels, Cooler Master's ML240R is the only cooler with a net-positive result. The pair of ID Cooling units make a solid showing only during 50% fan speed tests.

Considering the ID Cooling Auraflow X 240 costs well below the average unit price threshold at $90 (£71), it makes a relatively neutral value showing at 100% fan speeds and easily shows the best value at 50% fan speeds. While the Cooler Master ML240R is the only cooler to have positive temperature-to-noise graphs for both 50% and 100% RPM, it also is the highest-priced unit of the group.

Thermal imaging from our FLIR One PRO thermal camera shows nominal heat loading at 100% fan speeds, while 50% speed begins to show some heat soak throughout the body of the radiator. Likewise, noticeable thermal soak can be seen on each the outlet tubing leaving the pump body and the tubing returning to the pump inlet.

We still find it very curious that ID Cooling opted to utilize different fans between the Auraflow X 240 and the Zoomflow 240, with very little difference in noise levels, but a significant bump in cooling performance that favors the Zoomflow over the Auraflow X.

Lastly, RGB lighting options are relatively basic on the Auraflow X 240 and somewhat muted when compared to other RGB solutions available to system builders. However, while this disparity in radiance might be pose as a dilemma, this difference often means other cooling solutions also garner a higher price premium. As a result,  the ID Cooling Auraflow X 240 gets a recommendation for fiscally minded system builders who do not require absolute thermal performance.