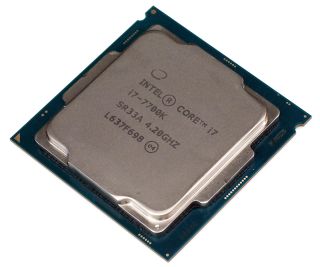 The greatest gift a review editor can receive is unexpected hardware, especially when that hardware is an anticipated CPU. What would you do with an early sample of Intel’s next-gen Desktop CPU? Overclock, of course! So would I.

[Editor's Note: Intel declined to comment on our general findings. Although the CPU we received is not marked as an engineering part, we cannot confirm with certainty that it is a retail sample.]

I downloaded the latest Kaby Lake firmware for my most recently-tested Z170 motherboard sample and began running benchmarks.

That’s right, I said Z170. It turns out that while the next generation of motherboard may provide minor feature enhancements compared to the current generation, they’re both compatible with the new CPUs. That’s certain to be a big relief to overclockers who recently burned their Skylake-based processors, and it makes sense because of Intel’s recently-adjusted Tick-Tock-Tock strategy of releasing a new die process (Broadwell), followed by a new architecture (Skylake), followed by a process refinement or optimization (rather than another new process). To the point: Kaby Lake is a revision of Skylake.

Intel says that taller transistor fins and wider gate pitch endow its 14nm+ process with an additional 300 to 400 MHz clock rate capability. That’s huge if it turns out to be true. As a motherboard reviewer, it’s also one of the first things I wanted to test!

Intel accidentally leaked a little information about its desktop Kaby Lake CPUs in a document concerning other variations of the processor. What the company didn’t mention was the graphics version or Intel Turbo Boost frequencies. It’s because we’ve seen the Core i7-7700K and Core i5-7600K in action that we can provide that data for those two processors, and the asterisks in the chart indicate guesses derived from Intel’s previous models. We can’t say much about the revised Intel HD Graphics 630 without access to Intel documentation, which should be forthcoming when the company provides its usual information exchange closer to launch time; and none of our programs can pick out any pertinent information.

We’re also told that process improvements will enhance efficiency, but there is no free lunch. Intel didn’t change the core micro architecture between Skylake and Kaby Lake, and our motherboard didn’t even read a voltage reduction for the Core i7-7700K, compared to the Core i7-6700K. Our motherboard set the Core i7-7700K to 1.30V at its 4.50 GHz max turbo, whereupon it behaved exactly the way we’d expect our Core i7-6700K to act when overclocked to 4.50 GHz at 1.30V.

This particular motherboard dropped the full-load CPU voltage by around 20mV and the maximum full-load multiplier to 42x after I changed from firmware defaults to manual configuration and then back to automatic settings. It did this twice, both times after I initially used the CLR_CMOS jumper. Maximum power draw then dropped to 141W when turbo boost was disabled (bringing us down to the default 4.20 GHz; see chart below). Idle energy also dropped to 24W after several hours, but an idle period of that length exceeds normal test procedure.

The “no free lunch” statement still applies since 141W is more than 133W, but the only way I’ll reach an accurate conclusion about how much more power the higher 4.50 GHz frequency requires is to compare more boards. Update: Our first follow-up test has already confirmed a lower, 25W full-load power delta between the Core i7-7700K and Core i7-6700K when using a different motherboard. The new generation of motherboards that launch with this CPU will be the best boards to use for those tests, and we’ll have a batch of them ready when the NDAs of those manufacturers expire.

The power charts reveal my spoilers. This Core i7-7700K sample can be overclocked on this motherboard to 4.80 GHz at 1.30V, compared to the Core i7-6700K’s 4.60 GHz. I used Gigabyte’s GA-Z170X-Ultra for this test because it was my most recent review sample. The leftover chart tidbit — that I set the memory to DDR4-2933 — is due to this particular motherboard’s difficulty in achieving DDR4-3200 with four of my G.Skill DDR4-3600 modules installed.

The actual core overclock results of 4.78 GHz and 4.59 GHz are caused by the Z170X-Ultra’s oddball 99.65 MHz BCLK; the DRAM overclocks are identical due to motherboard limits; and I eventually gave up in frustration when trying to adjust the CPU BCLK with the new CPU. I’m sure a few of you Gigabyte fanatics have experienced the same BCLK stickiness.

The limits of the test board should leave plenty of excitement for future reviews, where new boards and memory may reveal new DRAM and BCLK overclocking heights! For now, I’m simply satisfied to find a solid core clock increase.

Next Page Benchmark Results
165 Comments Comment from the forums