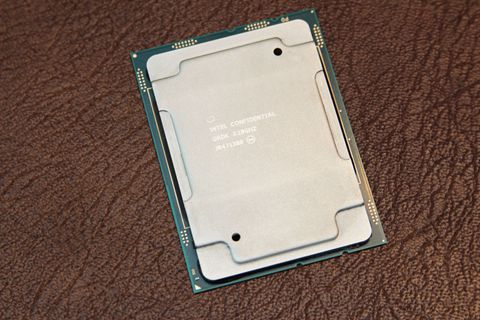 Intel’s Xeon W-3175X is Intel’s answer to Threadripper’s increasing popularity in professional circles, and it offers an impressive blend of performance without many of the compromises associated with the Threadripper lineup. AMD’s Threadripper processors exposed a weakness in Intel’s workstation-focused Xeon W lineup. Aside from Threadripper’s higher core counts, they also came at significantly lower prices and offered plenty of extras, like 60 PCIe lanes and unlocked multipliers. Meanwhile, Xeon W processors were at a disadvantage with locked multipliers and 44 PCIe lanes.

Unfortunately, Intel hasn’t sampled its other Xeon W processors for evaluation, but they largely mirror the core counts and performance of the Skylake-X models in our lineup, with the primary difference being reduced memory timings to accommodate ECC memory and locked multipliers. As such, we’re using the Skylake-X models as stand-ins for Intel’s other Xeon W models.

We’re accustomed to lower frequencies on high core-count chips, but Intel has mastered pushing the limits of its mature 14nm process. That shows in the W-3175X’s surprisingly high multi-core turbo ratios. That extra power kicks in during demanding threaded workloads, like our rendering, encoding and workstation tests, to deliver an impressive amount of performance. Overall, the W-3175X matched or beat Threadripper 2990WX in most of our threaded tests. Intel’s superior performance in AVX-enabled workloads also led to larger deltas in applications that leverage the densely-packed instructions.

The W-3175X also comes with a 4.3 GHz dual-core boost that provides snappy performance in lightly-threaded apps, like web browsers and mundane office applications. The second-gen Threadripper processors have made great strides in this area, but they still can’t match Intel’s frequency and IPC throughput advantage.

We included gaming testing in our evaluation for the enthusiast crowd, but also to underline that ultra high-end processors aren’t a good value if gaming is your primary goal. In almost all cases, you’re better served with a mainstream or HEDT chip.

AMD’s Threadripper WX-series processors offer solid performance in some workloads, but the unique architecture also suffers from reduced performance in others. AMD developed a series of different settings that you can apply, and they do help with some applications, but constant reboots to flip between modes isn’t a tenable solution for professionals with established workflows. AMD also designed a background process that monitors workloads and adjusts accordingly, but the results vary based on the application, too.

The W-3175X’s unlocked multiplier opens up another level of performance for those on the hunt for the bleeding edge, but as a result, it sucks more power than any processor we’ve tested. The processor consumed nearly 800 watts during our stress tests and often peaked at 700 watts during demanding threaded tasks. You’ll need a beefy power supply, or two, to really push the clocks. Our sample overclocked to 4.6 GHz with relative ease, albeit with the AVX frequencies left at stock settings. We dialed up the AVX frequencies in steps, but the extra thermal generation easily overwhelmed the high-end EKWB cooler.

As always, power consumption coincides with waste heat production, so prepare to foot the bill for an expensive watercooling solution, at a minimum, if overclocking is on the menu. Thermal output constrained our overclocking efforts, but you could expose more overclocking headroom with a custom loop or more extreme measures, like a water chiller or liquid nitrogen. That said, professional users and ‘creators’ aren’t the type of users that we would typically associate with overclocking, but AMD’s automated overclocking feature broadens the appeal by enabling an easily-accessible performance boost that even novices can exploit with the click of a button. It even dynamically adjusts based on the capabilities of your components. Intel offers its eXtreme Tuning Utility (XTU) for software-based overclocking, but it still requires manual tuning.

Intel’s ultra-premium platform is coming to market from system integrators first, with retail models slated to follow at an unspecified date. These systems will carry hefty price tags due to the components required, such as bulky watercooling loops and premium power supplies paired with expensive motherboards.

Professionals aren’t as sensitive to cost as they are to time: For professionals, minutes equate to dollars. The Xeon W-3175X will certainly find a market, albeit a niche one, in the professional segment. And perhaps with a few lucky well-heeled enthusiasts, too.