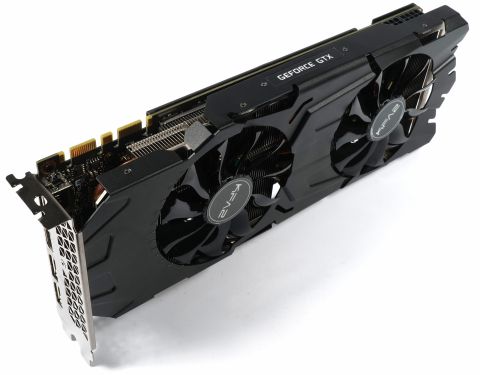 By default, this card's power target is set to a moderate 250W, matching Nvidia's Founders Edition board. It can be raised manually to about 300W, which is plenty for a modest dual-slot thermal solution. Not surprisingly, the stock target is hit during our gaming and torture tests. However, even if the power target is set as high as possible using Afterburner, the actual value peaks just above 287W. The cooler is simply overwhelmed before getting to 300W, causing the card to hit its 80°C temperature limit first.

The GP102 processor on our test sample is below-average, but good enough to allow a ~1772 MHz overclock at 0.975V after warm-up. With a bit of luck, 1847 MHz at 1.012V could be doable. It's simply not possible to go much further, suggesting bad luck in the silicon lottery. That's life, unfortunately.

Let's break the power consumption measurement into separate, higher-resolution lines for each supply rail over a two-minute interval. In spite of our intelligent low-pass filter, occasional spikes remain visible. In places, they reach up to 300W. On average, however, this card stays around its 250W power target.

Since the load is more consistent under our stress test, the peaks are almost completely eliminated. Instead, we see where GPU Boost kicks in to brutally limit power use.

Load On The Motherboard Slot

Ever since the launch of AMD's Radeon RX 480, we've been asked to include this metric in our reviews. But KFA2/Galax's GeForce GTX 1080 Ti EXOC gives us no reason to be concerned about load on the motherboard's 16-lane PCIe 3.0 slot. In fact, our highest reading is 4.4A, leaving plenty of headroom under the PCI-SIG's 5.5A ceiling.

Prev Page Gaming Performance Next Page Clock Rates, Overclocking & Heat
13 Comments Comment from the forums
Be In the Know