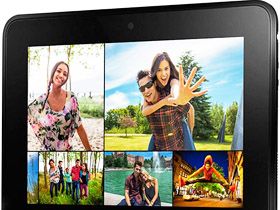 A big price tag isn't necessarily indicative of a great tablet. Google's Nexus 7 (The Nexus 7 Review: Google's First Tablet Gets Benchmarked) proves that you don't have to pay out your ears to get a lot of value. Prior to the Nexus 7, most of the tablet devices selling for less than $300 were either light on performance or features, hobbled by an older operating system, a lack of storage capacity, or previous-gen hardware.

Yes, trade-offs between pricing and performance even applied to Amazon's original Kindle Fire (The Amazon Kindle Fire: Benchmarked, Tested, And Reviewed). With the company's name and shopping structure behind it, though, a $199 price tag pushed Kindle Fires out the doors with haste, even if it wasn't the fanciest tablet on the block. As a delivery mechanism for content purchased from Amazon, the Fire did what it needed to do well enough to get folks thinking twice before spending two or three times as much on an iPad.

A year later, tablet vendors know that cutting corners to hit lower prices won't work. The Nexus 7 changed the rules, and it's now possible to get the performance of a $500 device in a $200 package. This, along with plans to roll out a slightly improved Kindle Fire HD, likely compelled Amazon to drop the price on its Kindle Fire by $40.

Stepping up to the Kindle Fire HD reveals Amazon's new pride and joy, though. Like the non-HD-named model, the Kindle Fire HD boasts a 1.2 GHz CPU, 1 GB of RAM, and the same Android 4.0 operating environment. The HD suffix indicates that the 7" tablet gets a 1280x800 screen, along with an OMAP 4460 SoC. The 4460 is almost identical to TI's OMAP 4430, which was used in the first- and second-gen Kindle Fires, except for its faster graphics hardware.

Although its internals are improved, the second-gen Kindle Fire is identical to its predecessor on the outside. Unfortunately, that means our criticisms of Amazon's first-generation tablet carry over to the latest incarnation. Mainly, it's both heavy and thick for its seven-inch screen. And, aside from its beefcake dimensions, matching physical attributes make telling the tablets apart almost impossible without turning them on and digging into their software.

There is no mistaking the Kindle Fire HD, however. The imperceptibly lighter and slightly thinner Kindle Fire HD is more comfortable to hold, though we're not crazy about the wider chassis that extends out beyond the non-HD models and Google's Nexus 7. Fortunately, there are some practical advantages to the extra width. Holding onto a narrow tablet often forces your thumb to press against the display trim, resulting in inadvertent gesture commands. You may like the wider Kindle Fire HD, then, if only because it helps ergonomically in certain situations.

Back to the second-gen Kindle Fire. Like its predecessor, the Fire lacks any physical controls, aside from a power button on the tablet's bottom edge. In contrast, the Kindle Fire HD features a physical volume control positioned between the headphone port and power button along the tablet’s top edge.

The Kindle Fire HD endears itself to home theater enthusiasts with a Type D micro-HDMI port that facilitates easy connectivity with HDTVs. Naturally, Amazon provides this feature with the hope that you'll watch purchased movies on a big screen. But keep your charger handy when you hook up to an entertainment system because watching movies drains your battery quite rapidly.

Although they're certainly appreciated, physical volume control and HDMI output hardly impress us; most other tablets already include those capabilities. But Amazon has one other ace up its sleeve, the Kindle Fire HD's "exclusive custom Dolby audio dual-driver stereo speakers," which can be inspected by popping off the rubberized plastic back cover. Holding the tablet in landscape mode, the speakers are located directly beneath the textured strip running along the back.

Amazon claims its audio setup results in "deeper bass in your music, loud, rumbling movie soundtracks, and room-filling stereo sound without distortion, even at higher volumes." Listening to music, we definitely perceived lower-frequency bass. The improved speakers are more difficult to appreciate during movie dialog, but sound effects are pretty great.

These are still very small speakers, though. They're not altogether different from what you might find on an Ultrabook. And while they're superior to the speakers found on competing tablets, their value is situational. We're most inclined to reach for headphones or earbuds when it comes time to watch movies (particularly in public places).

Next Page Kindle UI: If It's Not Broken, Don't Change It
30 Comments Comment from the forums
Be In the Know