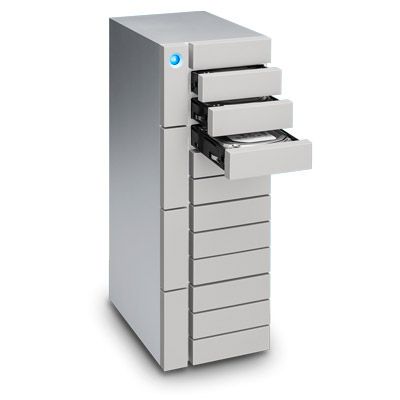 The LaCie 12big is in a class of its own. Creative Professionals can't get enough Thunderbolt 3 and LaCie delivered with more of everything. We wish the system had a little more power to increase redundant storage performance, but if you need more than 100 TB, the 12big can deliver.

LaCie's new 12big Thunderbolt 3 breaks the direct attached storage mold. The 12big houses up to 12 drives, making it the largest storage tower we've ever tested. The Thunderbolt 3 interface provides twice the raw performance of Thunderbolt 2, and combined with the 12-drive capacity, this tower gives professional users the capacity and throughput to work with 4K, 5K, and even 6K video in real time.

The LaCie 12big is 17.6 inches tall, but it looks much larger in pictures. You can tell this new pedestal tower is big, but its size becomes more apparent when you place it next to a computer monitor. LaCie also claims the tower can deliver 2,600 MB/s of throughput, so it might bring big performance to match the large footprint.

Intel developed Thunderbolt technology, but Apple brought it to market first. The broader PC market adopted the interface later. Apple brought Thunderbolt 3 (TB3), the latest and fastest iteration of the technology, to market in three MacBook Pro models. The laptops feature TB3 ports and not a single USB port (although TB3 also merged with USB 3.1 with the Type-C interface). Apple also built a $30 bi-directional TB3-to-TB2 adapter that allows older devices or host systems to communicate with the newer interface.

Thunderbolt technology is not new or particularly rare on the PC. Most motherboard manufacturers already have add-in cards or integrated onboard connectivity. The interface lets you run large storage systems at high speeds, but it originated with Intel-proprietary chips. Intel recently announced that it is giving away the IP so third parties can build less-expensive device-side controllers that are more power efficient. Intel will also bring Thunderbolt technology to the CPU die in future desktop processors. That will make Thunderbolt as common as the USB interface.

Until then, high component costs will limit TB3 technology to creative professionals. In recent years, systems like the HP Z800 workstation have pried market share away from Apple in the prosumer/creative space. HP systems are usually more powerful than Apple's, and cross-platform software allows you to run the same applications on both operating systems.

Creative professionals, such as YouTubers, filmmakers, and post-production specialists, are among LaCie's target audience. These groups are a growing demographic. For instance, YouTube viewership is through the roof as the number of so-called "cord cutters" just hit an all-time high last quarter.

The LaCie 12big comes packing many features that transform it into a smart storage device. An onboard RAID controller powers the system and provides several user-adjustable settings and modes. That allows you to dial in the best performance for your workload.

Nested RAID options like RAID 50 and RAID 60 aren't possible unless you have a large number of drives. The 12big supports powerful nested arrays, but most of us will use traditional RAID levels to maximize performance and capacity. The most popular options will be RAID 0, 5, 6, or 10. You don't have to use all twelve bays in a single array, either. It's possible to build a RAID 0 array to access data at very high speeds and then an additional RAID 5 or RAID 6 array for long-term storage. The 12big is also the only shipping Thunderbolt 3 system with USB capabilities and RAID 5.

Thunderbolt 3 is one of the best data interfaces ever released. The PCI Express 3.0 x4 control chips support 32Gbps of bandwidth and can carry both the display output and other traffic through the same cable. Combined, Thunderbolt 3 delivers 40Gbps bandwidth. The 12big features two Thunderbolt 3 ports for easy daisy chaining with other devices. It also features a USB 3.1 Gen 2 port that you can daisy chain with the Thunderbolt string. You can also use it to connect to a host system, but it is slower than Thunderbolt.

The system ships with six different power cords so your ready no matter where you are in the world. It's a large system, but I've seen videographers boast about taking their 12big and 6big Thunderbolt 3 systems to every shoot. Now I understand why LaCie and third-party companies sell Pelican cases with custom form-fitting cushion inserts.

LaCie includes four applications plus a Thunderbolt driver. You will have to download the software from the LaCie 12big support page, but that ensures you get the latest revision. The suite includes two Backup Manager Pro applications (Genie and Intego). For the security conscious, LaCie's Public Private software supports AES 256-bit encryption.

The company also recently updated the RAID Manager software. This is the interface you use to configure your array (it ships in RAID 5), change the settings, set up notifications, and more. It's a comprehensive interface with powerful features.

Given its size and cost, LaCie will sell most 12big systems through online retailers. The company put together an attractive package for brick-and-mortar stores anyway. The front of the package has a drawing of the system and a list of specifications.

LaCie pre-installs the drives and wraps the 12big in a plastic bag. LaCie packaged the system very well. The design is like the packaging used with many large flat-panel TVs. The carton is built around an inner structure designed to keep the system secure.

The system looks great on your desk. You can tell it's a quality build and the system has a nice texture. We thought it was made entirely of aluminum, but we found plastic under the textured covering on the drive bays.

The famous signature LaCie blue orb also returns. The orb is smaller than we've seen on most of the previous models, but it still serves the same function. When it is blue, the system is on and operating correctly. If it turns red, you have a problem and should consult the LaCie RAID Manager application. The orb is also a button. Pressing it sends the system into a suspended mode to reduce power consumption.

All of the connectors are on the back of the system. This is where you plug in the power, the two Thunderbolt 3 ports, and the single USB 3.1 port. There is also a reset button on the rear of the unit. LaCie also outfitted the 12big with a Kensington lock port near the reset button.